following the post, where I've shown you the Dunwich horror, it is only naturally to show you Dunwich itself.

It is a very limited in terms of buildings so far, but after I'd make a little shed or something, It could easily fill whole 2x3 table, used for Strange Aeons and not look too crowded.


One day I was searching for Lovecraft's books in slovenian libraries and I was thrilled to see our local library actually has one! I've borrowed it and read it. At first, it was kinda silly to read in slovenian after I've listened to english audiobooks, but as Lovecraft is somewhat hard to read, it started to be quite pleasant when I kept reading. In the book I noticed they kept talking about some weird roofs, so I went to check the english verison (you can find everything on google, but even more so, if you search for english words!), and found out the roofs are supposed to be "gambrel". Internet permitting me, I've turned into an architect and schoolar of New Englands colonial architecture over night. Or so I hoped.

However, I've cut two "gambrel houses" out of foam board and glued them together. Then I've figured two houses would be boring, so I made one into a barn.

I've covered it in popsickle sticks I had laying around. I really like the sticks as they're bigger and wider than coffee stirrers, but my hand was aching for two days after I've made the building, from cutting the hard wood with nothing but my olfa, or "stanley" knife.

Here are some pictures: 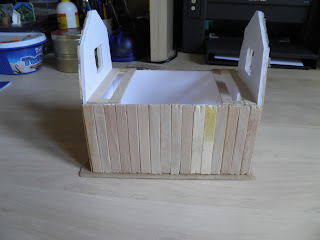 Roof needs to be done, but I have to make a visit to an art shop for some thicker paper...or you guys got any better idea of what could be used for the basis of the roofs? 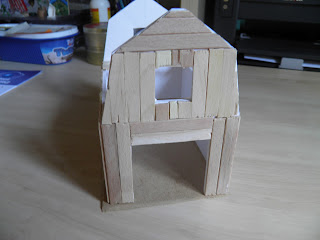 Front entrance, I am still debating if I should make a door or not...any suggestions?
The barn would be filled with barrels of ...erhm...lemonade. Every terrorist group (sorry, cultists, Im attending lectures on terrorism :P), needs financing. Nothing works better than alcohol in times of prohibition! 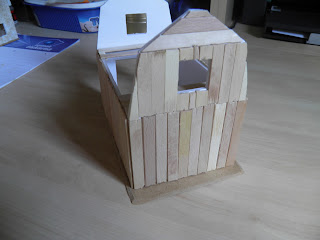 Back side, mostly identical to the front, but minus the doors. 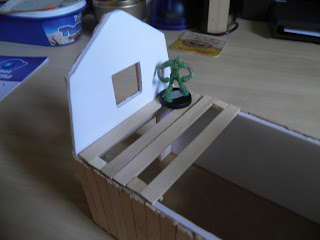 I got two "stands" for upper floor. They can be put one to each window or both together. They will be accessible trough a ladder. 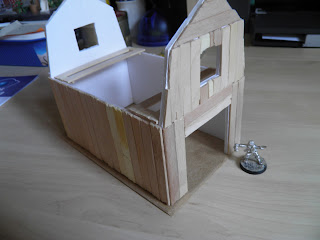 Here is our little hero (still unpainted!) for scale. 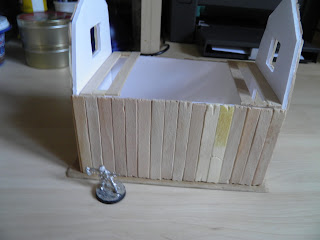 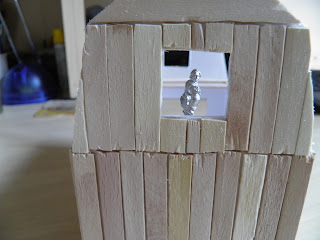 
Below is an exact same building, regarding the foam core, but it is otherwise different. It is representing an old colonial "barn house", as Dunwich was said to be the oldest village in 30 miles radius or something. It is covered in the infamous coffee stirrers. Yes sir, you are correct! I have finally tracked the wooden buggers down in Ljubljana! At 6,5 euros per 1,000 I am still debating if that is cheap, but well, I got them now. Covering a house in planks ended with a pleasant result, but I still prefer popsickle sticks for my barn. 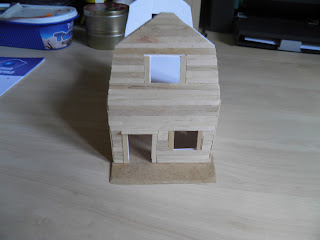 Here is the back door. 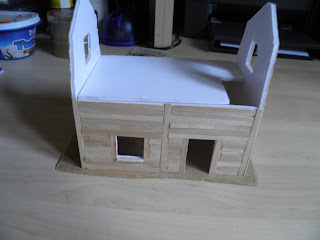 And front entrance. I've left some planks sticking out and such, for some variety. It is supposed to be half thorn down anyways! 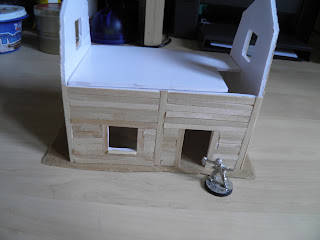 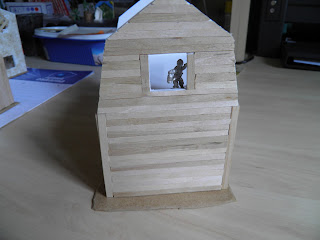 For the end, here is an old Whateley's farm. I was really happy with it, until the sand I've covered it in has dried. I am REALLY REALLY sorry I didn't cover it all in coffee stirrers. It would take quite some time, but it would look fantastic!

I went for the sand because of the large area. The problem is, the front entrance looks way too boring I think it at least needs a little roof above the door to make some details around the entrance.

If you don't know the story, Whateley's farm is a large, old farm with peaked roof. Here lived an old wizard, his daugther and later two spawns of Yog sothoth. One, Wilbur was shown to the public. His "twin brother", later known as the Dunwich horror was not. In the story, there are indications that it was locked in a barn. Later Whateley has built a ramp, leading to the door (that were made out of window) on the 1st (as in 2nd) floor. Whole floor had its internal walls demolished and was boarded up. When Whateley died, Wilbur has moved to a shed and boarded up whole of the farm, destorying all the internal walls. This is what my model represents. 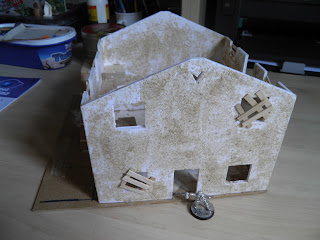 Here you can see the building with agent Raymond for scale. I haven't boarded up all windows for some variety. The boarded ones can be played as normal windows, boarded, or giving concealment etc. 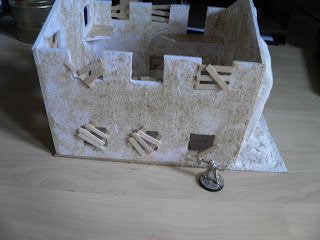 One side of the farm, nothing special about it. 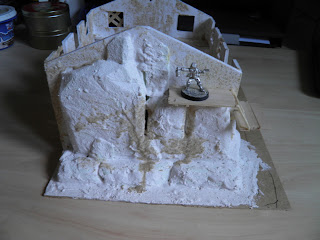 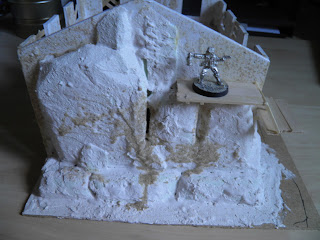 In the book, it is said the farm was built into a rocky cliff. This was represented by those rocks, covering the back side. The terrace Raymond is standing on way my own addition, to compensate for lack of windows on this side, making model more interesting in the gaming sense. 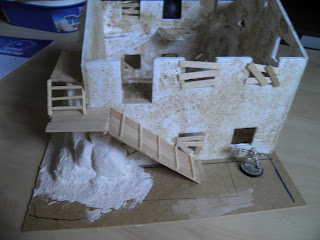 This is the most interesting side, where you can see the ramp, leading too improvised door. As said, I've also made a connection to the terrace behind a building. 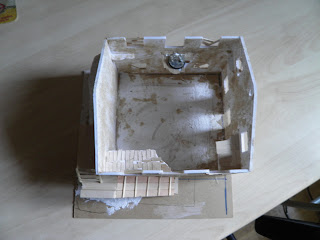 An overview of the inside. I've build three remains of the 1st floor, accessible by ramp and then jumping. Be careful, though, if a model standing on such a limited space is shot by a shotgun, he can fall off! 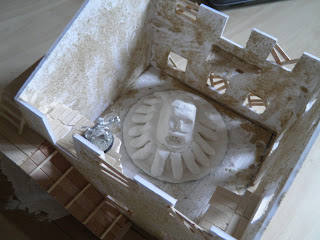 Here is a set up picture. As you can see, Raymond has climbed the weird ramp and held his lamp to see what lurks inside! 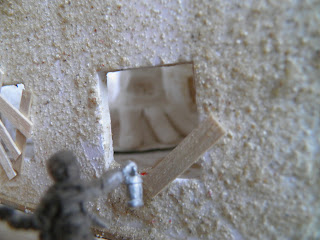 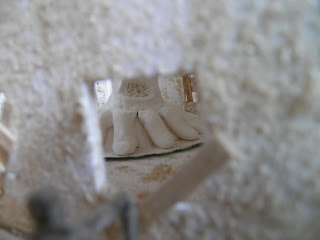 And all together for the end: 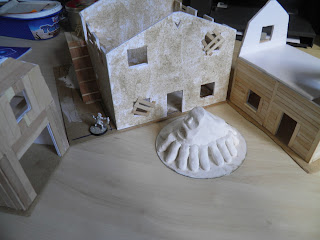 Yet again, thanks for looking. If you got any suggestions on how to make the buildings better, please feel free to share!

Cheers,
Mathyoo
Posted by Mathyoo at 11:43