Hi guys,
I played another game earlier this week. It was rather large and to keep it interesting, involved the introduction of elite foreign fighters on the rebel's side and a tank (yes, a tank) in the arsenal of Slovenes.

Following the ambush of Slovenes [look at the last post], more similar attacks on the international and government forces were carried out in the capital. The attacks in the North of the city were so fierce and numerous, that the rebels were able to fortify themselves in the area and do not plan to be moved from there.

As a result, Operation Angelica was devised with hopes of clearing this large pocket of resistance and to establish a firm governmental control of the capital again. Once the capital will be secured, recapturing of the inland will be made possible. Attacking from several lanes of approach, the IIF (International Intervention Force) will push into the territory and clear it. It is hoped that sheer strength and determination of the attack will break the rebellion, but the fighting could just as well bog down to a costly street fighting.

Assault at the Cedar lane will be spearheaded by the Slovenes. The road is blocked and covered by fire from the near-by houses turned strongpoints, overlooking the position. Slovenes have to make their way to the barricade and check it for any signs of explosives [a fair roll of 4+ on D6]. If the barricade is mined, EOD team has to be called in [arrives next turn on the roll of 6, then 5+, 4+ on any other turn] and cleared by the EOD technician [roll of 4+].
Once the barricade is safe to be removed, an M-84 tank will assist in pushing open the road for the reinforcements to advance.

Beware: Damage to property must be minimal, so tank's main gun is not to be used, unless against enemy armour - if it appears.
For the same reason, artillery or air support will not be available for the attacking troops. 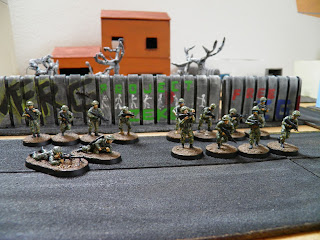 An M84 tank is to join the attack for the push past the barricade. It is vital that the tank is not exposed to unnecessary fire and - when engaged - that it is fully supported by the infantry.

If the attack bogs down, SAF troops on the flanks might send additional men to make sure the attack goes well. 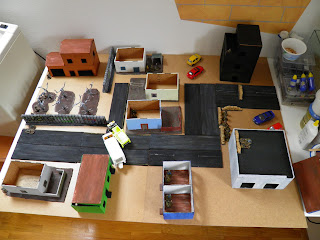 SAF in left side, bottom up: Team Ankaran behind a grey house, MMG team at the concrete wall, Team Bled behind the trees, Team Celje behind the terracotta  house.


Rebels from right to left, bottom up: MMG team on top of the super market, Foreign fighters Group Arnold behind the sand bags, Sniper on top of  the motel, Group Brad in blue semi-detached house, Charles in light blue house, Duncan behind white house on top. 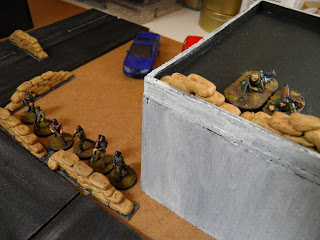 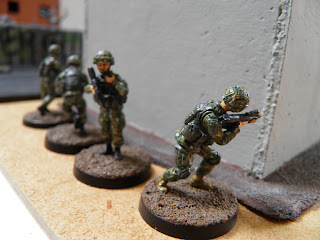 Team Ankaran ran to the green house in an attempt to secure barricade's right flank.
Team Celje pushed in the larger house in the orchard and opened fire at rebel Group Charles, scoring one hit that suppressed one of the rebels. The rebels were rather passive and even the fearsome foreign fighters decided to wait to see how the attack unfolds before they join the fight. 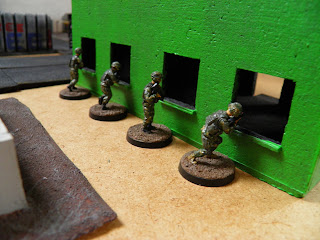 Team Celje managed to keep the steady rate of fire and scored another hit against Group Charles, slowly reducing their numbers. 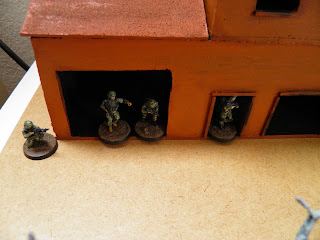 Team Bled joined in the firefight against Group Charles, but contributed little more than just a sound.
Team Celje kept their fire going and scored another lethal hit against the same target.

In the mean time, team Ankaran surged to the other side of the house and opened fire at Group Brad, scoring a hit.  The return fire from well entrenched rebels was devastating, leaving two soldiers suppressed! Luckily, SAF MMG team was well positioned and sprayed Group Arnold through the barricade, scoring a hit! 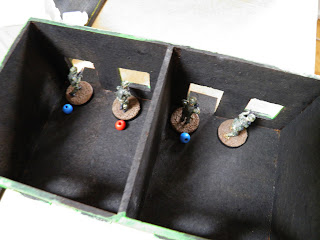 Further north, Group Duncan - lead by the infamous Yellow Jacket - took on the initiative and moved towards the orchard where Teams Bled and Celje are positioned. They opened fire at team Bled, hoping to aid their comrades of the Group Charles, suppressing  two Slovenes and scoring a lethal shot on the SAW gunner. Judging by the recent events [Every single modern game I played so far], carrying a SAW brings a curse and a bullseye on you. The return fire of Slovenes was not effective. 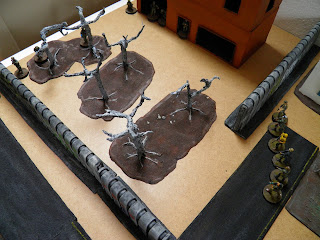 Combat continued, bullets flew everywhere, but still - nobody was able to obtain any form of superiority. 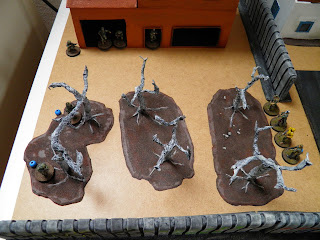 Targeted by Group Brad, Team Ankaran suffered a heavily wounded, that had to be escorted to the back - but how, when the fire by the rebels is so heavy?

Things were going even worse for Team Bled, that lost another soldier to the rebels of the Group Duncan. Luckily, team Celje's aim was accurate and they scored two kills and a suppression on team Duncan - is the luck for the Slovenes starting to turn? 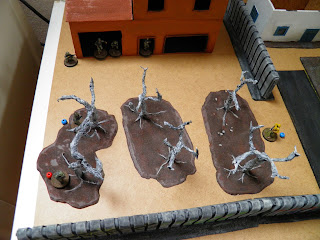 Apparently not, as Team Ankaran just lost three men, 4th being heavily wounded and waiting for extraction to medevac.
The success of whole assault in jeopardy, an M-84 tank was called in to intervene.

Cavalry arrived! Cautiously, an M-84 rolled down the street, stopped and opened fire at the Group Charles. Still respecting the ROE, it sprayed the house Group Charles has turned into a fort with HMG fire and has failed to leave an impact. 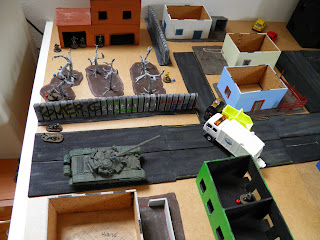 The arrival of the tank meant the foreigners better go in action, they tried hitting the tank with an RPG across the barricade. The rocket flew in the gap between the trucks and scored a hit,  badly shaking the crew, but otherwise not damaging the tank.
Second shot was more accurate and exploded near the tank's main gun, destroying it. There goes the temptation to use the main gun!

SAF MMG team kept firing at Group Brad in an attempt to keep them away from the wounded mate. Up north Teams Bled and Celje were still exchanging fire with Group Duncan, killing one of theirs but losing another one of Bled's to a heavy injury. 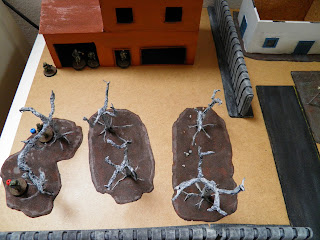 To help evacuate bleeding member of the Team Ankaran, another team was been sent in - designated Team Drava. Joined by a combat medic, their mission is to stabilise the wounded and escort him back for medevac. 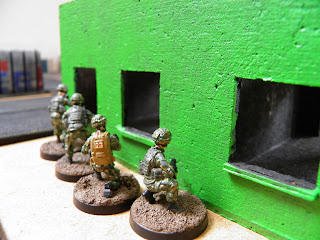 In the orchard, Team Celje eliminated Group Duncan and moved on to engage Group Charles. The rest of the battle was at a stalemate.

Medical team reached the wounded soldier and medic immediately started escorting him back to the casevac [Medic became a separate group in game]. The rest of the team divided their tasks, rifleman checked the barricade for explosives , but thankfully the rebels did not plan them [Lost another chance to use my EOD team in game!]. Team's SAW gunner and Grenadier opened fire at Group Brad and scoring 2 kills in their quest for vengeance. 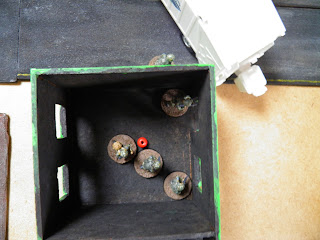 Team Celje moved forward and engaged Group Charles, scoring two hits. This got them in the range of the sniper on top of the apartment blocks, but he failed to hit any of them. Team Bled retreated in the back to bring the wounded to the casevac. 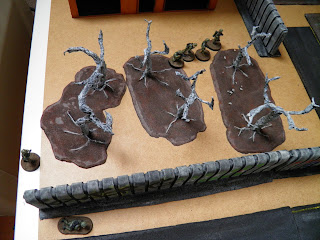 As the medic was escorting the wounded member of team Ankaran to the back, the rest of his team opened fire at Group Brad, completely obliterating it, but was in turn suppressed by the rebel MMG team.
In the orchard, team Celje completely demolished Group Charles.

Foreign fighters' RPG gunner kept firing at the tank, scoring a good hit on the tracks and thus immobilising it. The assault will have to be carried out on the flanks of the barricade, after all! 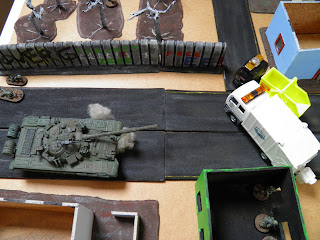 Rebel sniper has managed to get a hit on team Celje's infantryman, who was saved by the armour plate.

Crew in M84, while immobilised, turned their attention to the foreigners and sprayed them with HMG fire, suppressing a rifleman and killing a RPG gunner [as per dice rolls! - but I later realised elite rebels can have more than one person suppressed.]

Dropping his friend at the casevac, Bled's team lone survivor caught up with Team Celje and attached himself to them. 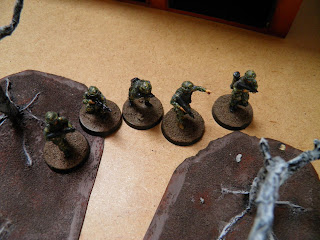 With the RPG gone, M84 crew started firing at Rebel MMG on top of the market store, suppressing the gunner. Team Drava, the three man team that joined the fight with the medic, exchanged some fire with the Foreign fighters, but without any effect.

Out of targets, SAF MMG team pushed forward to engage from a closer range.

The sniper aimed was on point now, scoring a heavy wounded in team Celje! 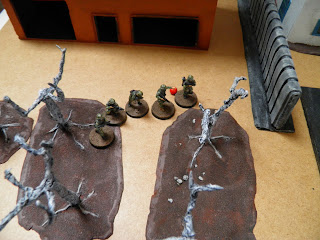 After dropping wounded man at the casevac, medic returned to battle and was on his way to rejoin Team Drava. His team divided fire between MMG team and Group Arnold, suppressing two of the latter and killing one of the former.

The joy was short lived as rebel MMG sprayed them, causing a heavily wounded.

Team Celje split as wounded man was escorted to the back, while the rest of the team moved forward. 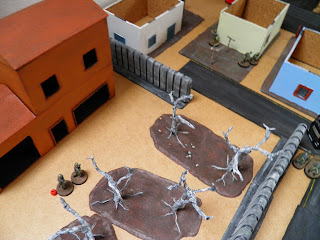 Team Celje engaged the sniper, suppresing him and in eventually killing him, while also engaging Foreign fighters. The assault was closing to an end.

In a subsequent fighting, M84 managed to destory the rebel MMG team and SAF MMG team moved forward, just to lose an assistant gunner to the Foreign fighters.

It was then just a matter of time, before the last of the rebels were destroyed and the battle was won. 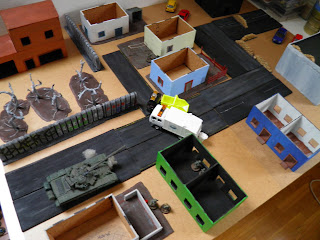 Initially, I imagined that the only way forward would be through barricade, but I am quite satisfied that I left the gaps open for infantry. Infantry can, after all, move rather freely.

I fed Slovenes a tank and an extra fire team, that I believe saved them from suffering a retreat. This isn't totally fair to rebels, that got no extra troops, but I did say the games would be rather biased.  The idea was that this game was just a part of a larger battle, where attack would not be started without a decent numerical superiority and being surrounded, the rebels couldn't quite get relieved. Also, three mediocre SAF teams and a MMG team were up against three bad an an elite Rebel teams, supported by MMG team and a sniper. The worse problem than team composition is the unintentional fact that I think about what to do with my Slovenes and less so about what to do with the Rebels. To remedy this, I will try to shift my AARs into more story-like posts as who shot at whom makes for a rather dull read.

Tank proved to be a rather fun addition. The rules are so simple, anything heavier than small arms and HMGs can penetrate the tank - so there is no difference between a RPG of this or that description. I simply used tank as a Medium tank, giving it a 3+ save. With my bad rolls, this made it rather vulnerable - as it should be. Bringing a tank in town is never really a good idea. Other than that, I think I had too many teams on board and I got lost in knowing who was activated and who was not (which is also due to fact I was not concentrated on the game, which is a side product of playing alone).

Furthermore, I made a bucket load of mistakes during the game. While the rules are really minimal, I kept realising I forgot about several things. Other than that, I am growing to like he system.

All summed up, at least I am continuing with the "campaign" and using my miniatures. I expect to play more games eventually, but have currently been struck by a painting mojo, so I am working on some of my other projects.