Another group of miniatures finally got the loving they deserved after two years in the "tomorrow, really" drawer.

This time it is a group of Cynocephali, the dog-headed race from the other side of the Rotten sea that is known for their war-like, cruel and human-hating nature in general.

They are generally described as having human bodies and dog heads, but some claim they have goat legs or even one eye at the front and one at the back of their skull!

The eldest will have you know the dreaded soldiers ride in battle on horse-back and howl!

While the idea of Cynocephali is really, really old, the resemblance to Atila and the Huns is evident. Later, the Pasjeglavci/Pesjani/Pasjedlani as they are called in Slovenia, were associated with the Turks, whom in their invasion of the Balkans and push to the Vienna left a lasting impact on the region to a point where everything bad was associated with them for hundreds of years after they were gone.

Among others, there is a tale of Pes Marko ( "Mark the Dog",). Marko was born by a count's daughter that was locked up in a jail (tower) by her father. He gave her a dog to play with, which made her pregnant and thus she born Pes Marko. He eventually became the leader of Venice and pillaged the city in rage.

This tale supposedly originates from middle ages, during the wars between the Holy Roman Empire (that included most of today's Slovenia) and Venice, which is known for Saint Mark and venetian lion - you get the rest!

I imagined these ruthless creatures would be the most common enemies of any heroes wandering in the land of old gods and made four of them. A leader armed with an axe, a bow man for some long-range support and two spear grunts.

For the soldiers, I simply used some of left over GW Ungors I had from the Dunwich project. I have to admit I really like the miniatures. They are plastic and easy to work with, they are on the large side and quite cartoony, which I think fits well with the fantasy. I did, however, cut the axe to something more manageable. 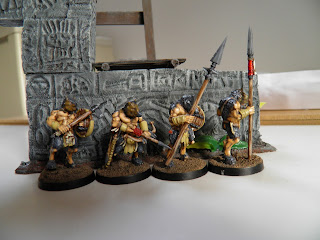 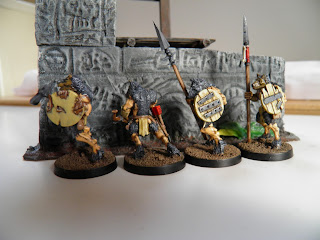 Other than that I gave them a quick paint job and that's about it. They were kept very simple and I really have to say the photos don't do them justice. Surely I shouldn't just go with black pelt and the brown is all wrong, but overall I am quite satisfied.

In other news, I am preparing some of my own sculpts/conversions for moderns and fantasy and looking at my Strange Aeons collection, I really think I should start a campaing - which brings me to my Moderns, that I would like to at least remotely finish first. Ah, so many plans!

Almost 2 years ago - I checked the blog history - I started converting Horrorclix's Fiend (Frankenstein monster) into a Kersnik, a local Slavic pagan (demi)god. .

To refresh your memory, influenced by SAGA and 7th Voyage that were both really popular back then, I decided to start a project, where wandering pagan party - consisting of nothing but heroes, of course - would fight the creatures of the lore with the intention of saving a damsel in distress or performing a similarly important deed. Equally, the mythos creatures could be used in games of Strange Aeons and would give me something to sculpt and convert. Evidently, the project didn't live long, but as I am clearing my old stuff, I decided to restart it.

Kresnik is the most common god (or semi-god) in Slovenian mythology, so he was an obvious choice for my god on earth. It appears to be a very localised deity, only known in Slovenia and parts of Croatia.
Mythos wise, he is a rather complicated character and it is believed that Kresnik is either Perun himself (kind of a Slavic Thor); that his brother, named Trot is Perun; that Kresnik is Perun's son.

As omnipotent gods would not be any kind of fun to game with, I decided to go with the semi-god option. Thus, Kresnik is a "Hercules" type of character, a son of Perun and mortal. As the luck would have it, it is believed that Kresnik did the 12 deeds, too!
According to the legend, the Son of lightning Kresnik was carried by his mother for whole nine years.  He was close to the people and in some versions, every village had a Kresnik of their own, protecting them from foul creatures and being that would want to hurt them or humanity. Those include, but are not limited to: Veles (Perun's arch nemesis), dragons, giant snakes, giant snake queens, false Kresniks (these are the worst!), vampires, cynocephali, centaurs etc etc.
Kresnik is not immortal and can die, but always returns to the world.


He has the arms and hair of gold and carries an axe, mace, lightning bolt or a knife.

At first I had high plans of sculpting my own, but I've decided to simply convert Horrorclix's The fiend instead. I got him a veeeeery long time ago from Vampifan - THANKS AGAIN!

The fiend is taller than ordinary human being, being almost 50mm tall, so he was perfect candidate for a god on Earth. I've cut him off his base and cleaned him up a bit. I've cut off the shackles, cleaned up the nails in his spine and made some other surgical tasks, before giving him a nice shirt, girly long hair and a manly beard.

Below is an eons old photo of him, before he was equipped with the second axe as well. If I am not mistaken, his hair were slightly retouched, as was his shirt, but no major work was done. 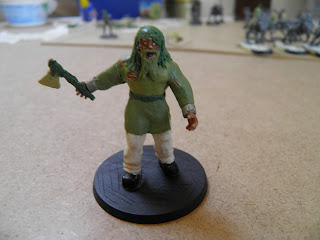 Then I left him in my drawer, forgotten until last week. To paint him, I went with a simple linen shirt that is these days associated with the pagan Slavs. Those are very popular in Russia and Ukraine, which is where Slovene "neo pagans" imported them from. I do not recall reading about them being worn here. I would presume 6th century Alpine Slavs would wear woolen clothes, but the combination of white and red was too good too pass. 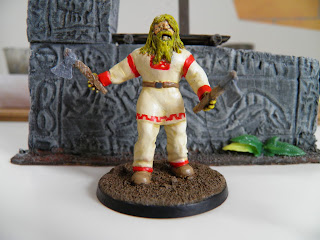 I armed him with two axes and gave NMM Gold a try. It didn't succeed and now he looks like a member of the Simpsons family. 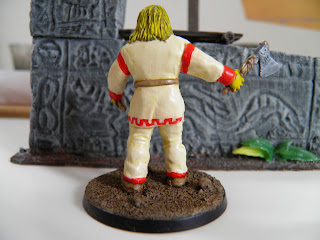 The painting was straightforward and I dropped all the ideas of energy flow shown passing through his eyes and/or axes. Now, he could also be used as a generic giant. He is mounted on a 40mm base and is shown with a flabbergasted explorer down below: 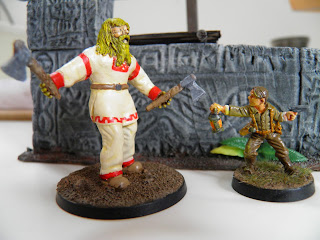 There is little to add, I have to paint a group of the most evil creatures imaginable and then I will get back to finishing sculpting other projects.

Thanks for looking,
Mathyoo
Posted by Mathyoo at 10:27 16 comments: