I am no good for a past year overview/new year plans. This year was supposed to be a year when I finally play campaign of Strange Aeons, yet I only played a couple of games before I got interested in the moderns project.

After more than a year of planning and small steps, I now have a decently sized insurgent army and an ever growing unique force of Slovenes. I would like to thank everyone that helped me achieving this and I hope I will continue playing my campaign in 2015 as well.

I would also like to take some time to thank to you, followers, as I would never keep my blog going without people that comment and read my stuff. I can only promise to TRY to make this blog better in 2015.

I am not sure what I will be doing in next year, but I think moderns will occupy me for most of the early months.


I wish you all a happy, healthy and successful new year and future in general!

I took a short break from hobby lately and I haven't done much that I could show. I am very slowly converting the rest of my Slovenes, while deciding on what kind of scenario I should play next time. I didn't want to let the blog die completely and showing some work in progress also motivates me further, as I realise how much I have really done.

While I did some work on other projects, my focus is still with the moderns. I still have 12 miniatures to convert and/or paint to finish the Slovenes. Once I am done with this I will probably purchase some more packs in future (namely Special Forces, Anti-Tank/Sniper pack and, naturally, a .50 cal pack!).

As of the latest reorganisation, Slovene squad has 9 members. A squad leader and two teams of four. From those eight, two have grenade launchers, two have SAWs, one has a better scope and three are ordinary riflemen, from which at least one would generally carry a disposable AT launcher. Obviously, depending on the need they could carry more or less than that.

For wargaming purposes, I am after two squads of two teams, one team with an AT launcher and one with a scope. I've finished the latter already and below are WIPs of the former:

The one below is actually finished (built from a "patrol pack"),  and all it needs is a launcher. This sounds easier that in is and I think I am at my 5th+ try now. My expectations have dropped immensely since and I'm just trying to make it look sort of symmetrical now. 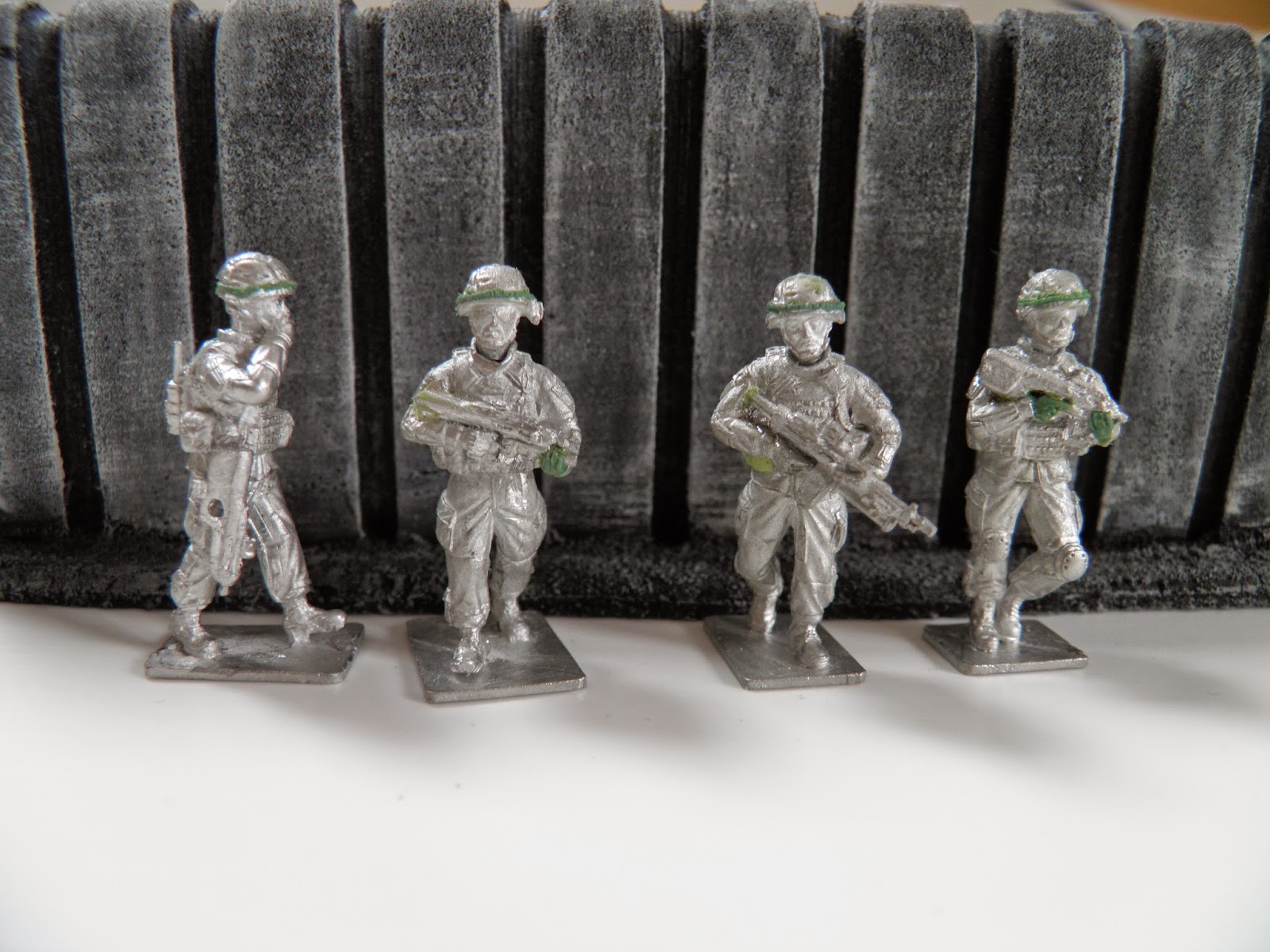 A rifleman with what I hope to look like RGW-90 below. I do like the position of his rifle. 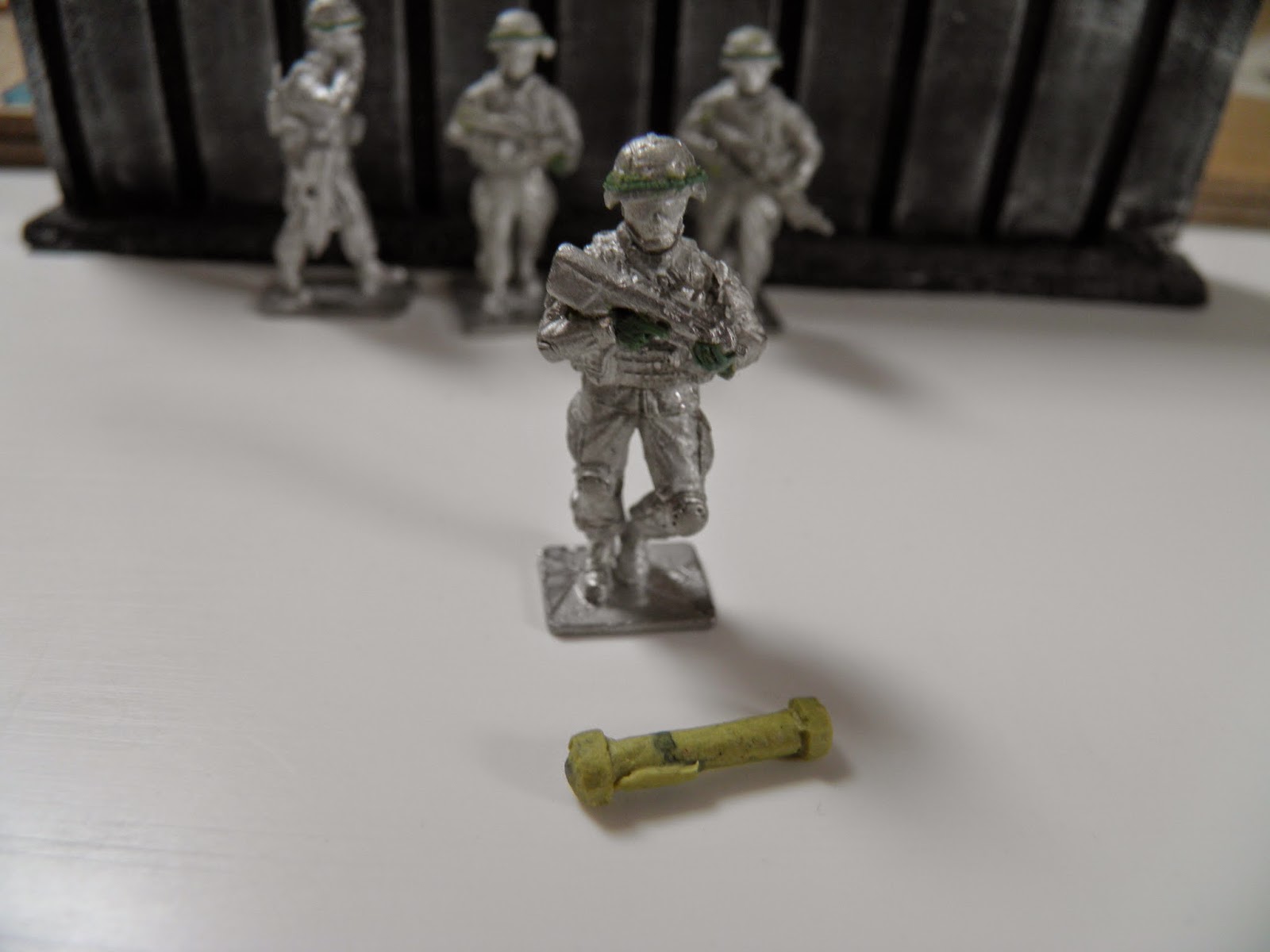 And the real deal here. The launcher has two modes, if the pointy thing is sticking out it's penetration gets improved and it can be used against armoured vehicles (or really well fortified bunkers) and if the stick is retracted, it's more suitable for making holes in the wall, hitting buildings and so on. This weapon belongs to the same family as infamous Armbrust, a weapon associated with Slovenian war of Independence, that proven much less effective than people hoped it would be. 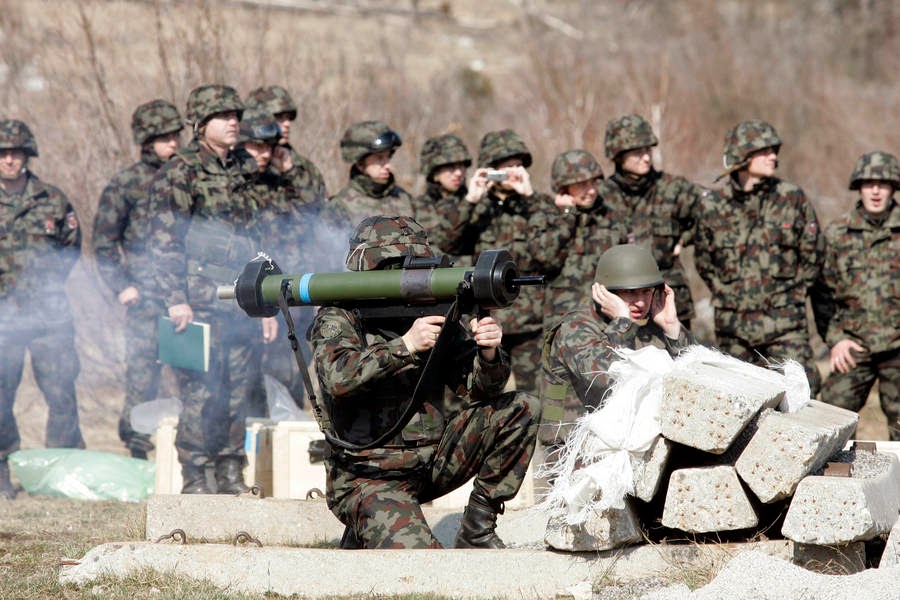 My fourth team is a conglomerate of several packs, as Empress only produces three teams as such. From left to right there is a miniature from the command pack (will be used as a grenadier), one from EOD pack and two from support weapons pack. One had an AT-4 that I am converting into a RGW-90 and the other one actually had a sniper, but I decided to use it as a SAW gunner instead. 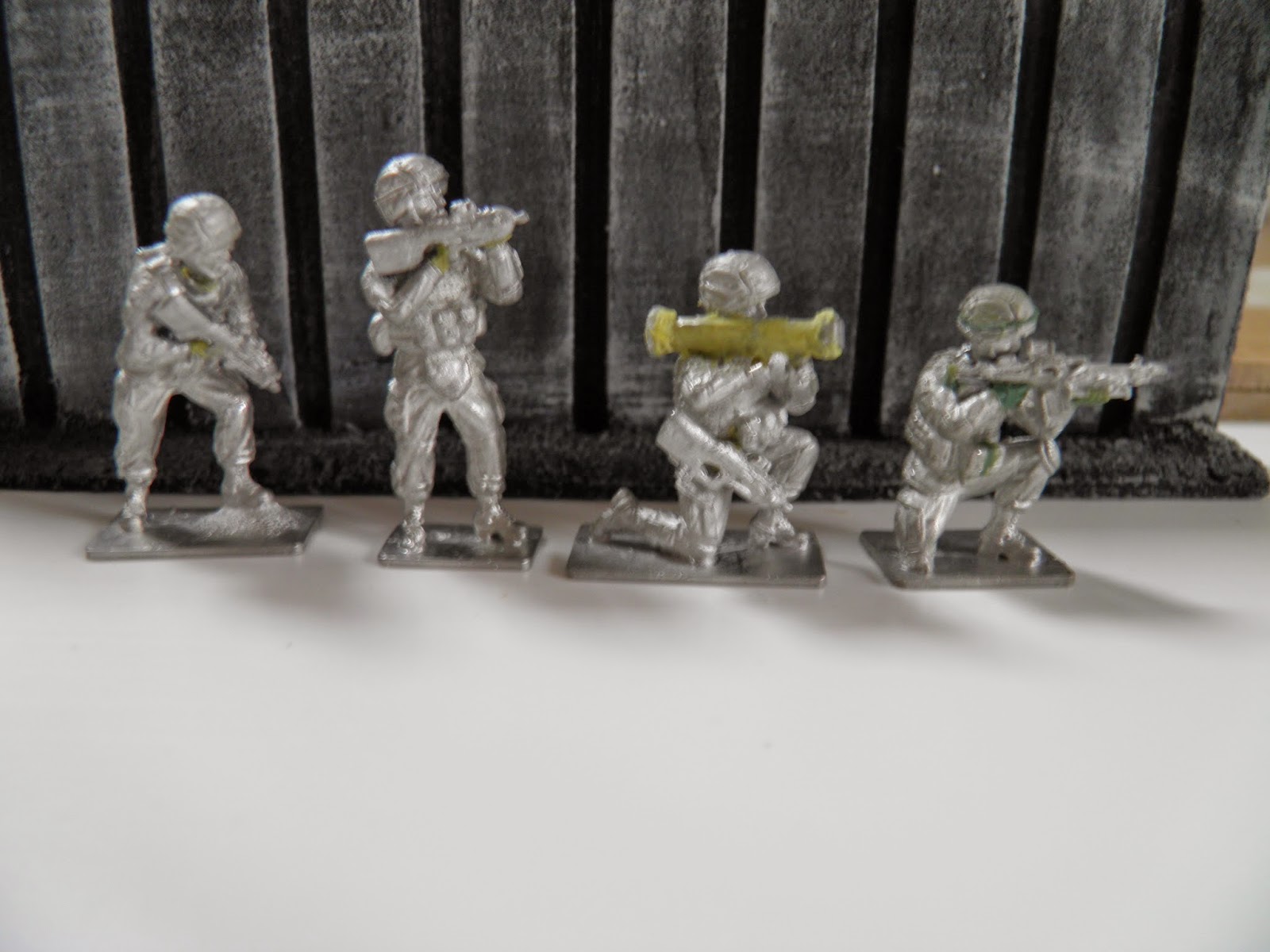 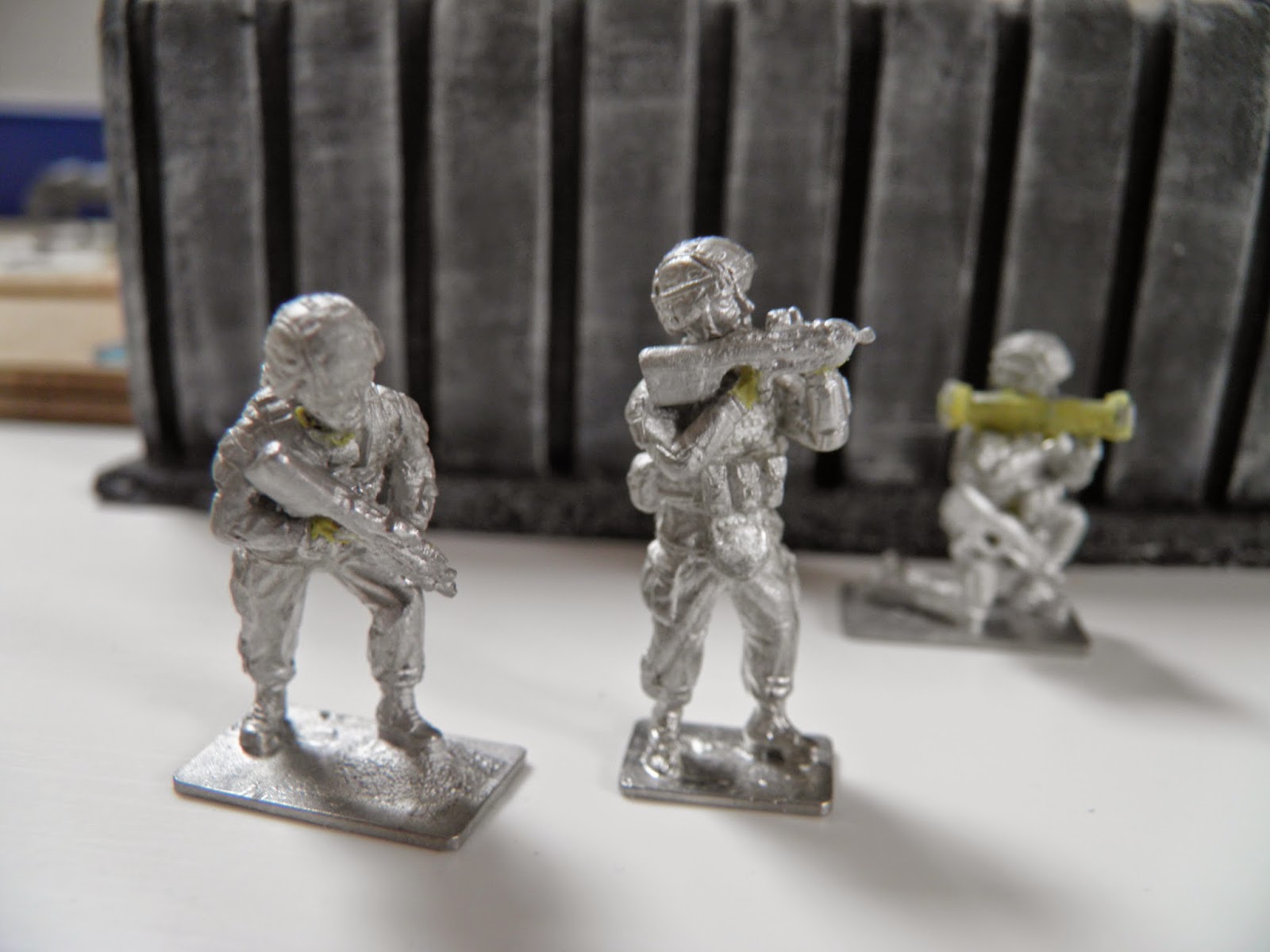 AT gunner. Note his right hand was chopped off. It was in the same position as that of a gunner on a pic below, so I chopped it off and repositioned it into a proper firing position. I am really fond of this miniature and while it's hard to work on the weapon attached to a body, I hope it will come out nice enough. 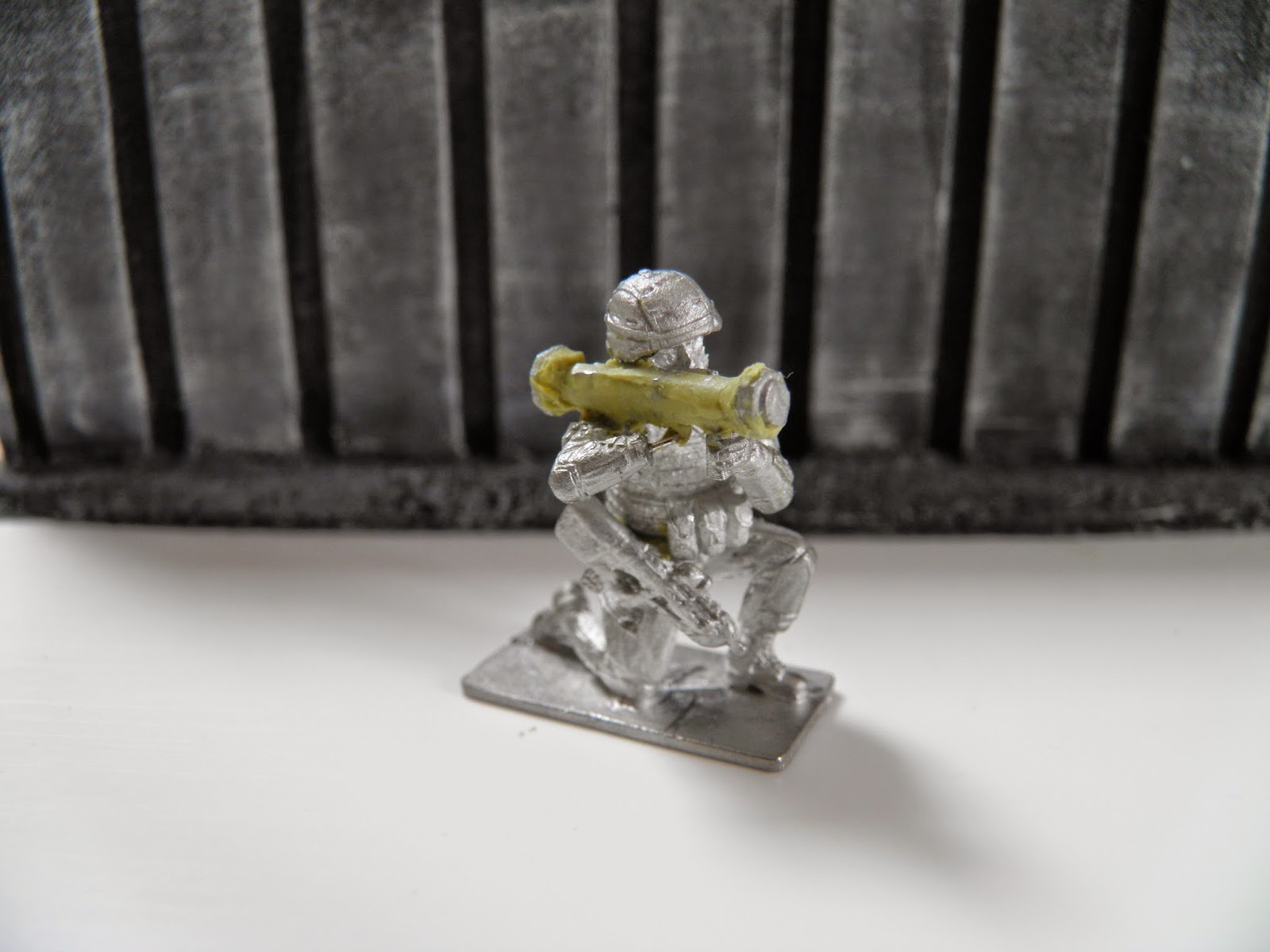 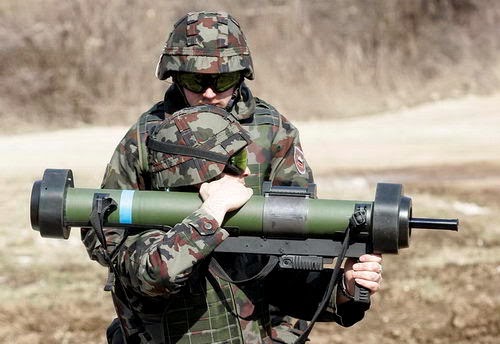 Lastly, there is a command pack I barely started working on. From left to right we got a combat medic, a radioman (will be converted into something special!), a guy from an EOD pack (I swapped it for the one used above as it looks more "leader-y" and a leader. The latter two will be used as squad leaders. This means my guys are lacking a platoon commander, but I can always swap some miniatures around, of course. 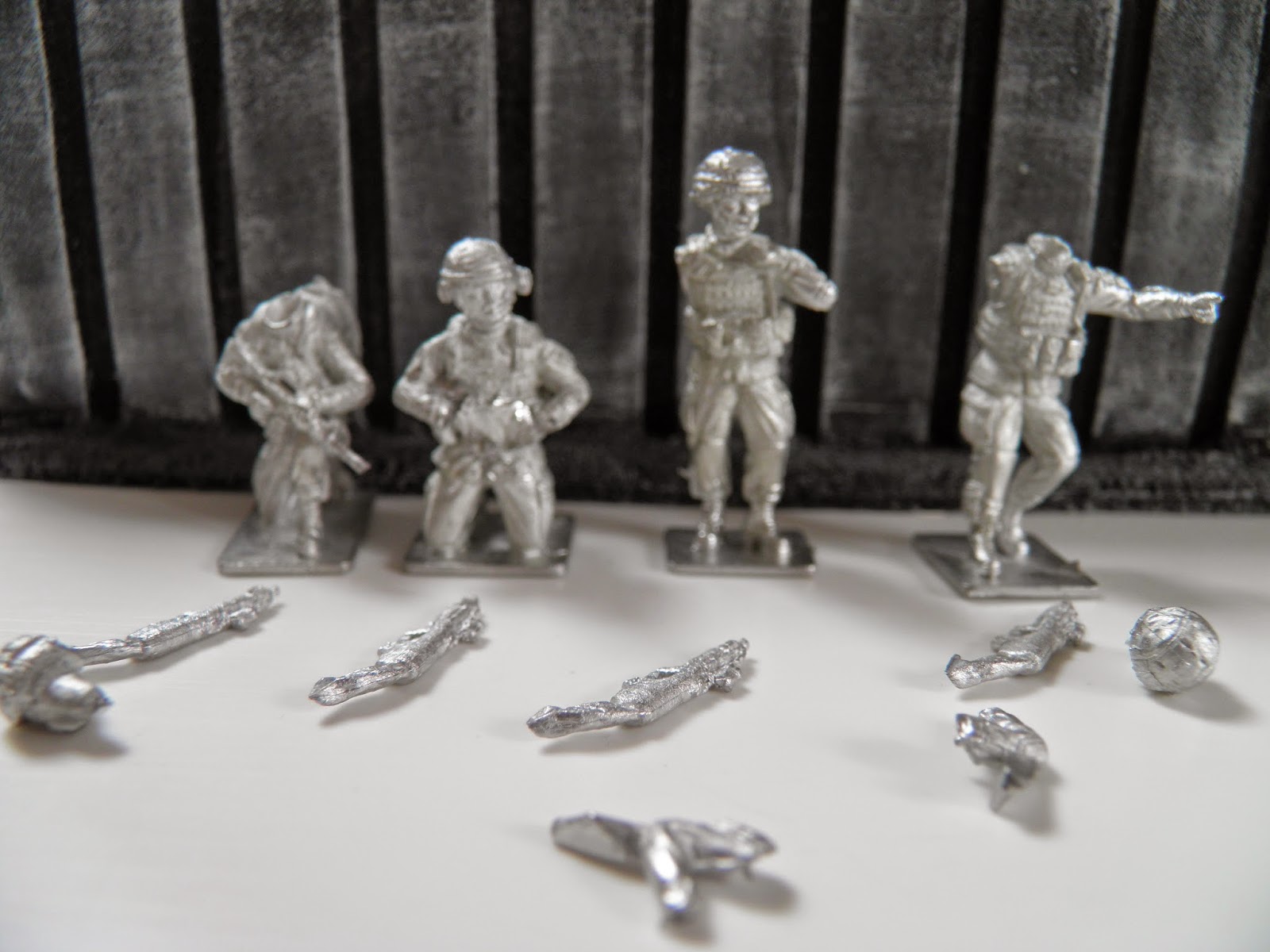 Medic and a radioman have their weapons touching their bodies and are a huge pain to clean up, I am still recovering from the radioman, before I will move on to medic. 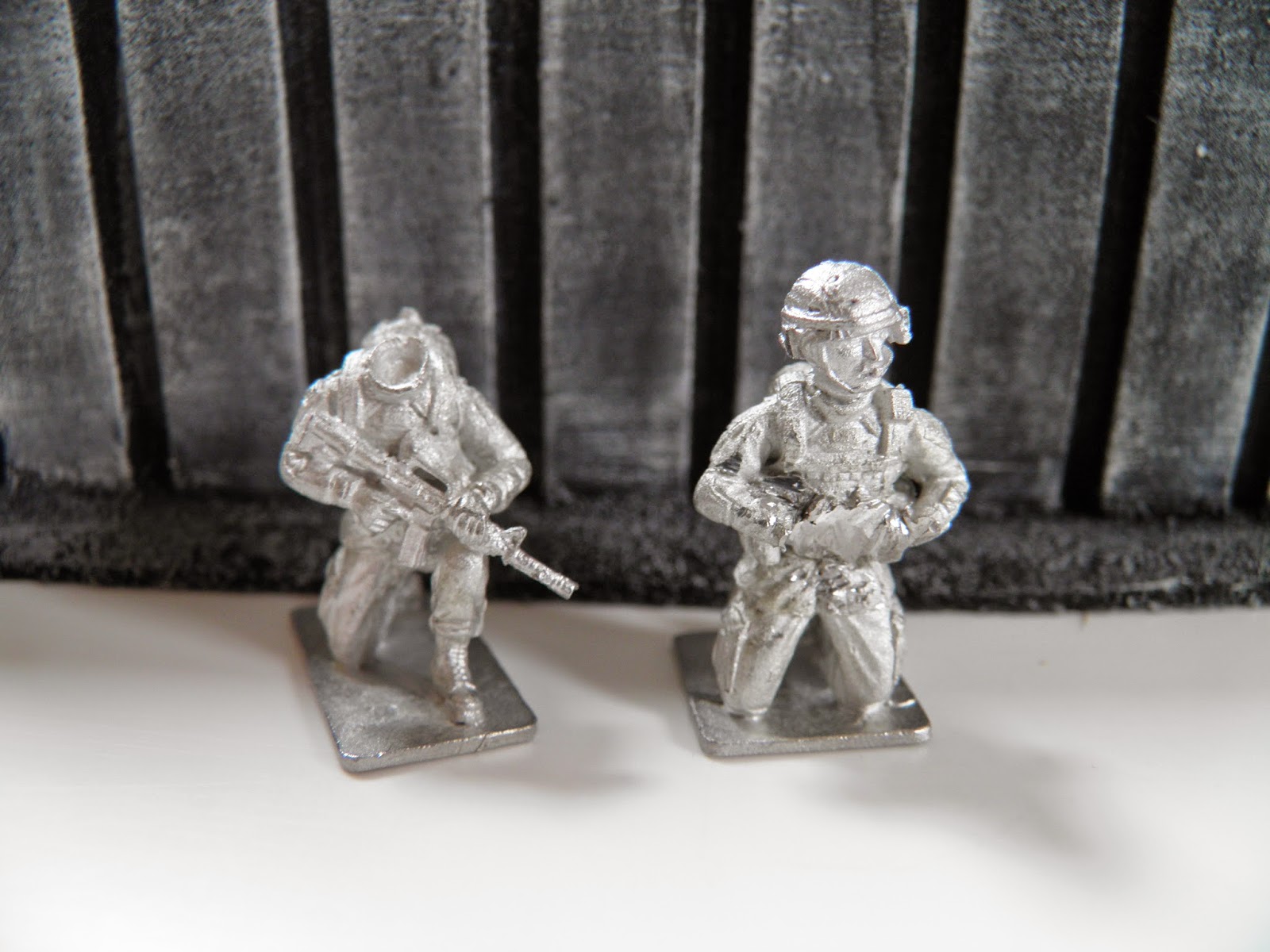 Lastly, I put together this...something. It started as a bunker/trench/something as I was just reading on WW1 again and had to do something about it. I will use it as a heavy cover for a support weapon of some sort. 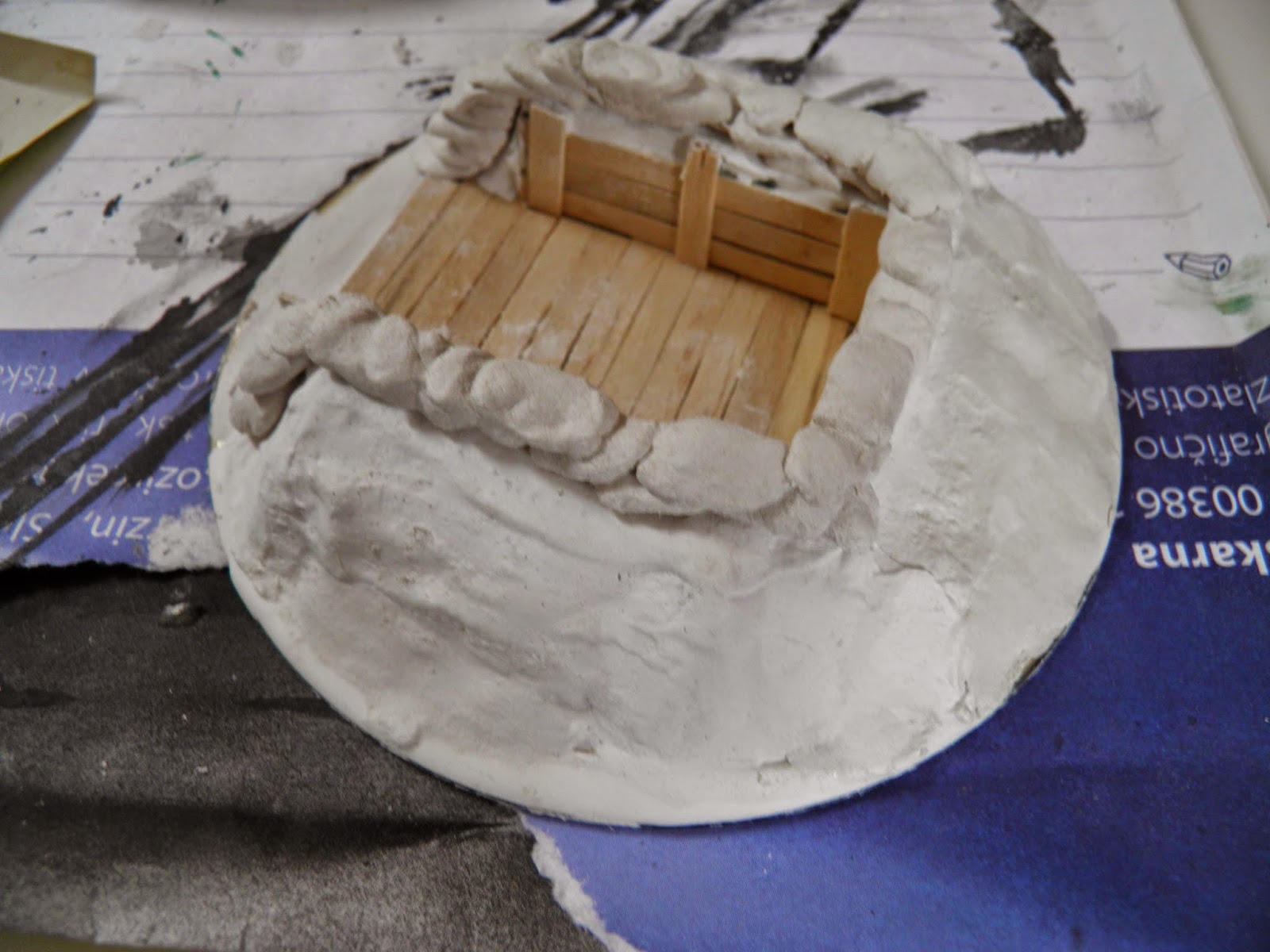 Unfortunately, as this zombie-converted-to-paramedic proves, two miniatures can't stand in it next to each other. I have no idea what I was thinking when planning, but I did measure the inner space! 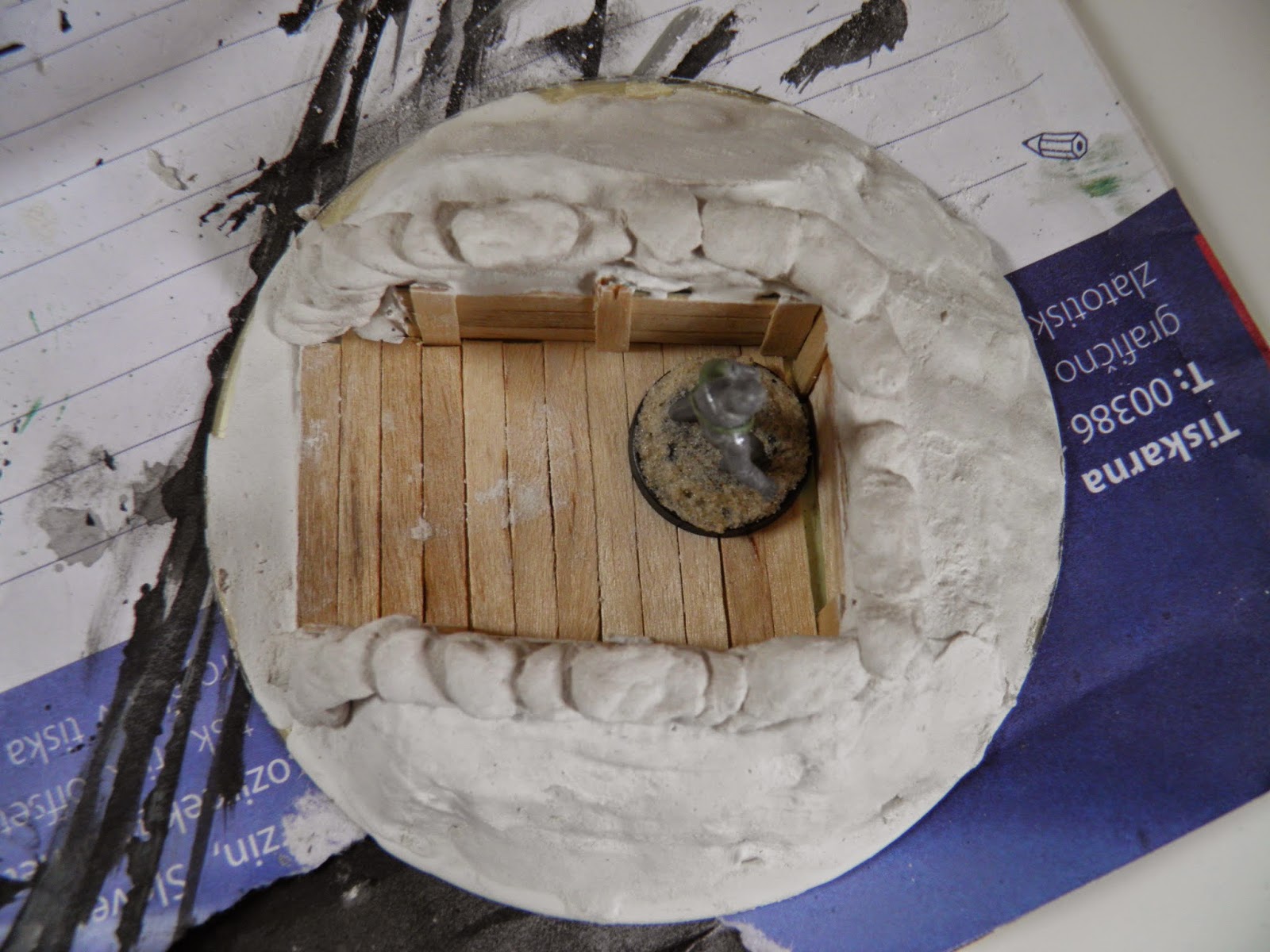 This is all for today,  I'll try to post next week, but it will probably be a "less gaming related" post.

Thanks for looking,
Mathyoo
Posted by Mathyoo at 10:59 18 comments:

another short post today. I am still going strong with moderns and I finished insurgents machine gun team. It's supposedly representing a Zastava M84 machine gun (or soviet PK if you prefer). I converted it from BAR gun, so it's not the best, but it looks suitably generic. Gunner is from Warlord games US Marines sprue, while assistant gunner is from the same company, German Infantry sprue. There is little need for prone figures, but they do work well for machine gunners, I'd say. It is a perfect counterpart to Slovene MAG team I painted a while ago.

It can't be seen clearly on my bad photos, but the assistant gunner carries an AK with folding stock. Here known as M70AB2 (and produced by Zastava), it used to be a standard issue rifle in Slovenian army prior to introduction of FN F2000S. As far as wargaming goes, I just wanted to model a folded stock for a change. 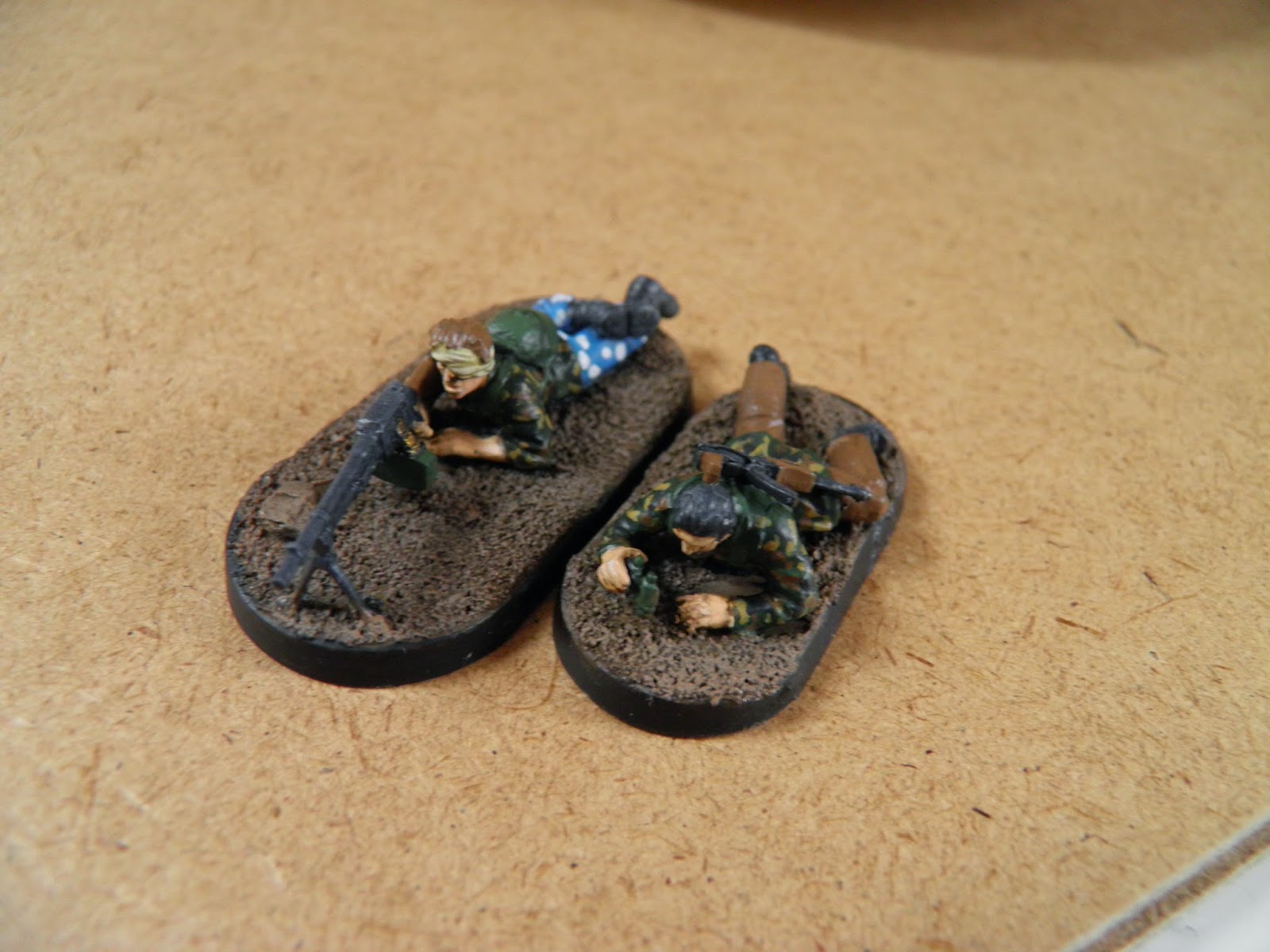 They both use same camouflage pattern jackets, but the gunner also has Chinese "cloud" pattern pants. They came out horribly wrong and it looks like he is either a weekend clown or still in his pyjamas! 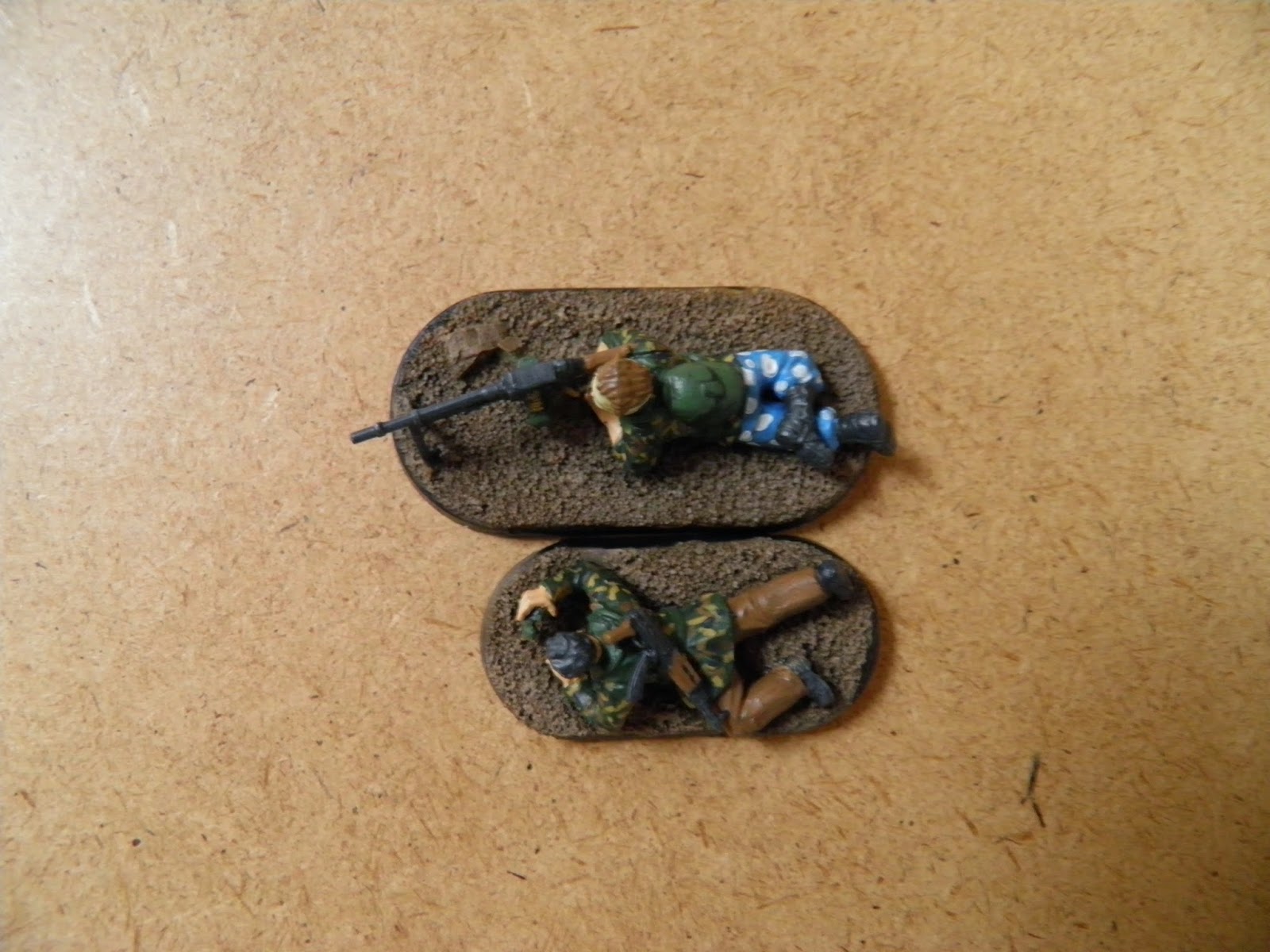 Thanks for looking,
Mathyoo
Posted by Mathyoo at 14:26 22 comments: