I have finally finished painting a pack of Under Fire Miniatures 28mm East Germans. These are one of the two packs that company does in 28mm, but they have a huge range of 20mm miniatures. They were sculpted by the same guy that sculpts Moderns for Empress, and quality hasn't suffered - they are absolutely fantastic.

Cold war is not something I was planning to dab into (as I opted for moderns instead), alas they were a gift so I was more than happy to paint them.  They will not be put away, however, as they will take the role of the Evergreen army in my moderns that was so far filled by my WWII US Marines conversions.

Being ignorant of Cold War Germans of either description, I had to do some research figuring out the equipment and camouflage. I am not too confident about my paint choices, but I think it should do well enough.

If I am not mistaken, they would fit in the late eighties, should anyone be interested. 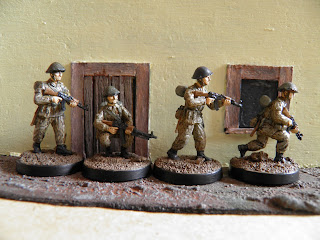 This pack gives you three guys armed with AKs and a guy armed with a RPK for a support. The barrel of the later actually broke in transit, but by simply sanding it a bit and gluing it back, the damange is not noticable at all. Other than that, they pretty much all sport same equipment, with ammo pouches of the RPK guy being a tad larger, which I think was a nice attention to detail. 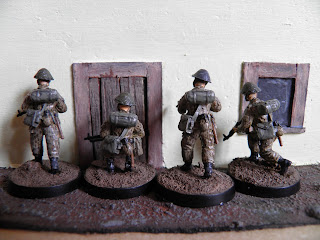 As I mentioned they were sculpted by the same sculptor that made the US Infantry I am using for Slovenes, but as you can see below the Germans are just a tad bulkier: 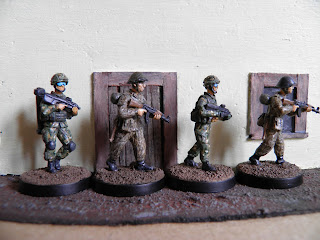 Unrelated, below are some notes on the paints used, mainly for myself as a future reference:

I had trouble picking up paints (not to mention painting the pattern). The pattern is horrible, it really is. It is brown stripes on brownish-greenish-greyish-beige background. The pattern gets lost from 5 meters away, so the easiest way would be to just paint the uniforms in one solid colour...but where is the fun in that?

I decided to make the pattern obvious, as these are miniatures after all and for that, I went with lighter brown background, so that brown stripes can be made out.

I painted the uniform this way (because of what I had available):

Helmet  - German grey, highlited with German Grey +  Green Grey to lighten it up

Straps, gas mask bag, bedroll all in Green grey with some black

I finished it all of with a light drybrush of German Beige Camo mixed with some white.


I have to admit I miss the RPG in this pack, but it will be provided in one of the next packs  that are due to be released, so I can always put them in. With my Evergreen army now matching my Slovenes, I am running out of reasons not to play a game soon. I am setting up an idea for a scenario already, but I always find myself missing some more terrain, so hopefully this can be a project for this week - perhaps some waist high banks that could represent various ditches and act like a cover in the large open areas?

As usual, thanks for looking!