I would like to wish everyone happy holidays, and  - assuming my posting trend continues - a happy new year, too.


In December, I painted up 4th team of East Germans, which is something like a command pack with assorted figures. It includes two leaders of some description (one even has a personal radio, which surprised me and made me wish there was a proper radio man, too!), another RPG and a sniper designated marksman. As you would expect, I am not quite satisfied with my paintjob, but all in all it isn't too bad.

I honestly tried making better photos, but it appears the more I try the worse they get. 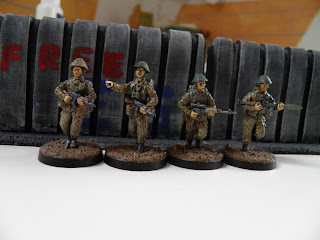 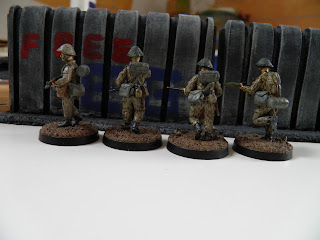 I have 16 now that would make up two squads. That's more than enough to fill the tiny 3x4 table I game on.  I will mainly use them in my moderns campaign as the organised bad guys, assisted by the rebels I've been using so far. I got some ideas for the campaign in my head already, but I'll probably play a few random games until I'm satisfied with the rules and while I insist on keeping the games free of politics, I think some sort of background would still be in order.

Thanks for looking,
Mathyoo
Posted by Mathyoo at 00:02 15 comments: