I have to admit I did not realise I haven't posted in almost a whole month - this is quite horrifying.

I can only apologise for the lack of presence on the blogosphere, I do actually look at a lot of blogs, but mostly fail to comment - and to write my own.

Interestingly, I was not passive in this time, as I kept sculpting the WW1 dollies. The progress was (and still is) slower than I'd like, as every time I hit an obstacle, I take a few days of 'rest'. I gave up on weapons momentarily, to focus on the dollies. The thing here is, weapons are eating up my nerves as I've must've started working on at least 7-8 rifles and I'm still not satisfied. Secondly, the more I work on the dollies the better I feel, as they start to resemble miniatures I want them to look like.


Some of the rifles below:

From bottom down: a ruler; two of the early ones; two of the 'these will be it' ones. There should be 4 but I lost 2 somehow (don't ask, I got no idea); lastly one that tries different approach and that proved to be too thick.

It was not all in vain, for I learned that 1:50 is too large and they need to be slightly smaller. 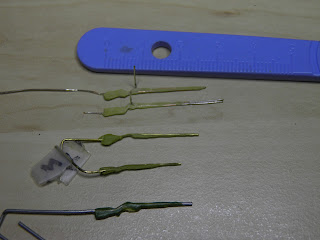 Since last time, I ditched the dollies without the cork and I dressed up the two I had on corks. Should you care - I decided they are not good enough and I am now using them to practice on the jackets.

I started working on a new trio of walking, bracing/semicrouching (?) and standing/firing rifle poses. As it takes time to get them from being a confusing wire to something odd to apparent legs, I didn't really feel like photographing or posting them.

Here they are, 2 out of 6 legs dressed up. They are the ones on the corks, while the older two sculpts are below them. Left, walking is supposedly Austrian and the right one is sorta-kinda-hopefully-eventually an Italian. 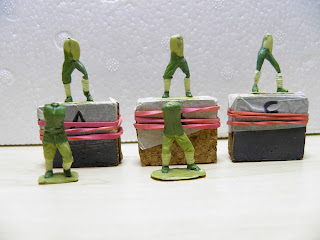 Close up on the two 'test pieces': 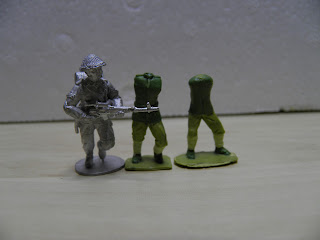 The photos below are as advanced as I've gotten so far. The legs are 'done' and after I add some bulk to their shoes, I will probably start working on another 3 poses. The idea is to have these legs cast in resin and use them to build up both Austrian and Italian uniforms out of them. That's why I won't be working on the torso. 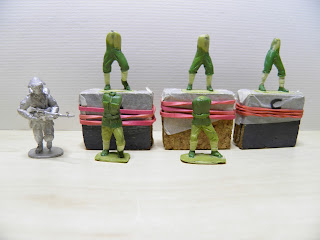 Back photo here. It is amazing how hard it is to make folds look good. 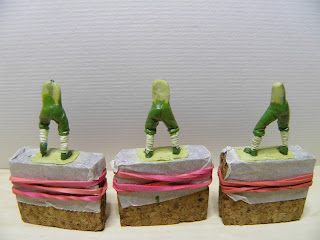 Here is a close up on Austrian uniform. It lacks some medals (really), ammo pouches and that's about it. It also needs some clean up around the pockets and I will have to find a better way to do the characteristic flaps. 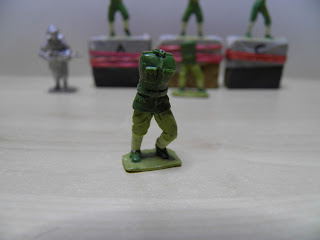 I've mad another face today, it still appears slightly too narrow. I am a horrible judge of scale and I can't really figure out what could I do to have it appear wider, but not larger. 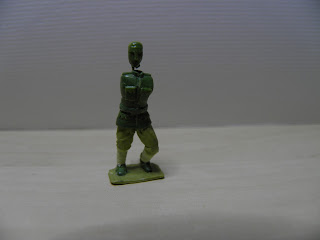 Compared to UFM East German sniper. I suppose my miniature is '28mm to the eyes', which is a welcome surprise. 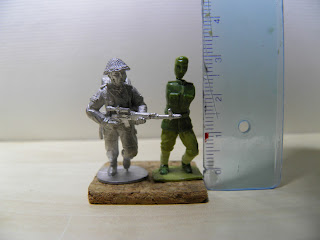 And again with the Italian uniform that unfortunately doesn't get as much attention as the other one. 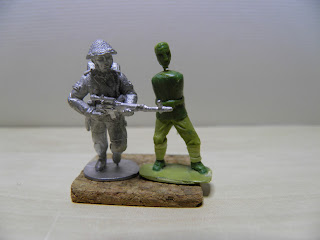 That is pretty much it, if I'd really try, I should have another 3 sets of legs finished by mid month. I suppose it does get easier with time.

Lastly, you might have noticed (I know you didn't!), the photos are a lot brighter. That is because I am a proud owner of a new LED white light lamp. Not to brag, but as the luck would have it, the most affordable one (yup, the one I got, naturally) also had a magnifying glass installed. Now I can both not worry light will dry my paints and putty AND work after 6 pm!

Thanks for looking,
Mathyoo
Posted by Mathyoo at 18:33 10 comments:

In the past weeks of radio silence project's momentum was lost by other more pressing matters - as one would expect. The  plan is still alive and the time spent on hobby was spent doing some trial and error (by which I mean error).

I tried myself at all sorts of things, from faces, weapons to bodies themselves. 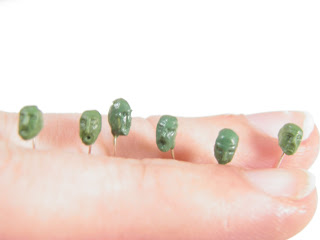 I sculpted 6 faces to go with my initial six dollies (that I have since quit working on). They are all a bit too small or at least too narrow - the second from the right being the only one I was satisfied with. And yes, it does look better in person! 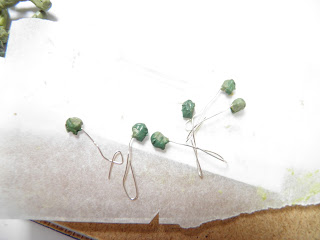 The best face with UFM German below. Perhaps the size isn't that bad at all. 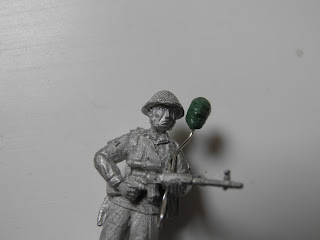 I also realised there is no chance I can sculpt shoes "in the air" and I needed a base to help me sculpt my miniatures from. This is the reason I quit working on the initial 6 dollies, but being raised to recycle, I will cut them slightly and repurpose them sooner or later. 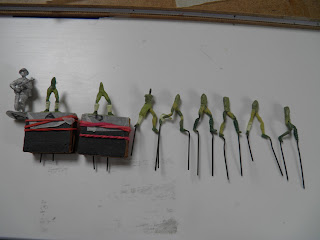 I also decided 6 is an overkill while I am still finding myself, so I started working on two instead. I also decided to try and look up to Under Fire Miniatures' Germans instead of Great War Miniatures. I began to believe natural poses are what makes miniatures great (even if sculpting is sub par as in my cases), so this is what I am aiming for. 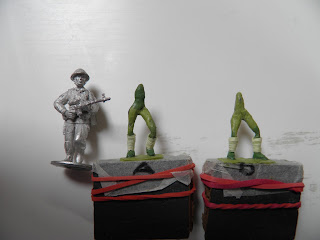 As you've probably noted so far, I took Ebob's advice and gave paper putties a try. I wasn't too convinced at first, but they give just the impression I want. Unfortunately, I am having huge trouble with consistency and only one leg out of 4 ended up as I imagined it.

The good leg up front, with the other being swollen: 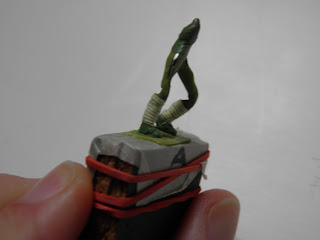 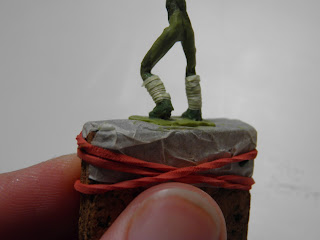 The other dolly has both of them awfully chunky. I was actually meaning to show them to you then cut them, but have instead decided to finish the dolly - it will be good practice and if miniature ever gets finished it will be fine for my purposes. 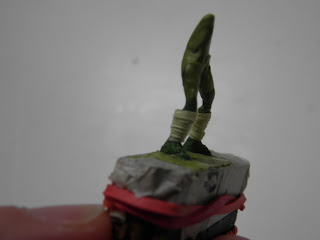 Both together, mind the leftmost leg is the one I am happy with. 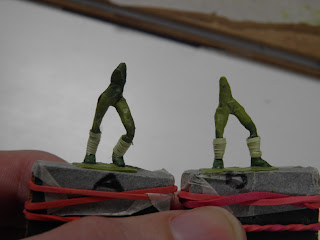 What I will do with the next batches is keep the lower legs very slim, but slightly exaggerate the muscle and the curve of the bone when looking from the side. That should hopefully work.

You might notice I didn't talk about shoes at all. I can be brief here: not satisfied.

To keep me interested, I was jumping from one part of the project to another and started working on some weapons and equipment. The latter I didn't bother photographing as there's nothing to show, but here are my rifles. 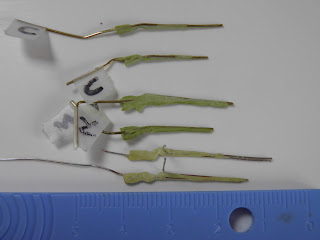 These are between 2 and 2.5 cm long. Carving is "easy" but I have no clue whatsoever how will I make short versions have the same stock as the longer. The best option would be having long versions cast and made smaller, but that's a task that can not really be done at this point.
They are now on stand by as I am gathering courage to work on them some more.

Sidearms I had more confidence doing as being 4-5mm long and being covered by the hands, they are essentially a rectangle for Austrian and a box for Italian. Should you care, left one is Steyr M1912 that looks (but doesn't really) like Colt pistol and the left one is Italian that should (but doesn't) look like an "Italian luger". 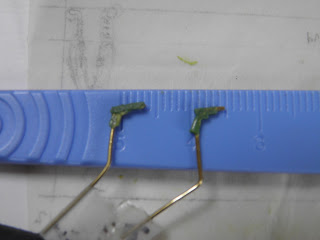 The problems encountered were all expected, so I am not too surprised and I indeed told myself I would sculpt 20 dollies to get 4 decent out if necessary, so I think its best to finish these and work on fixing mistakes with the next batch. I have a very old Miliput and GS to use anyway.

While sculpting prevents me from playtesting the rules, I can say there are nothing but good news in that department, as core mechanics are more or less all done and I am now working on some additional features.