I managed to paint my first actual SAF fireteam, Ankaran. The name comes from SAF phonetic alphabet. Ankaran, a coastal settlement and would be an equivalent of the famous "Alpha". 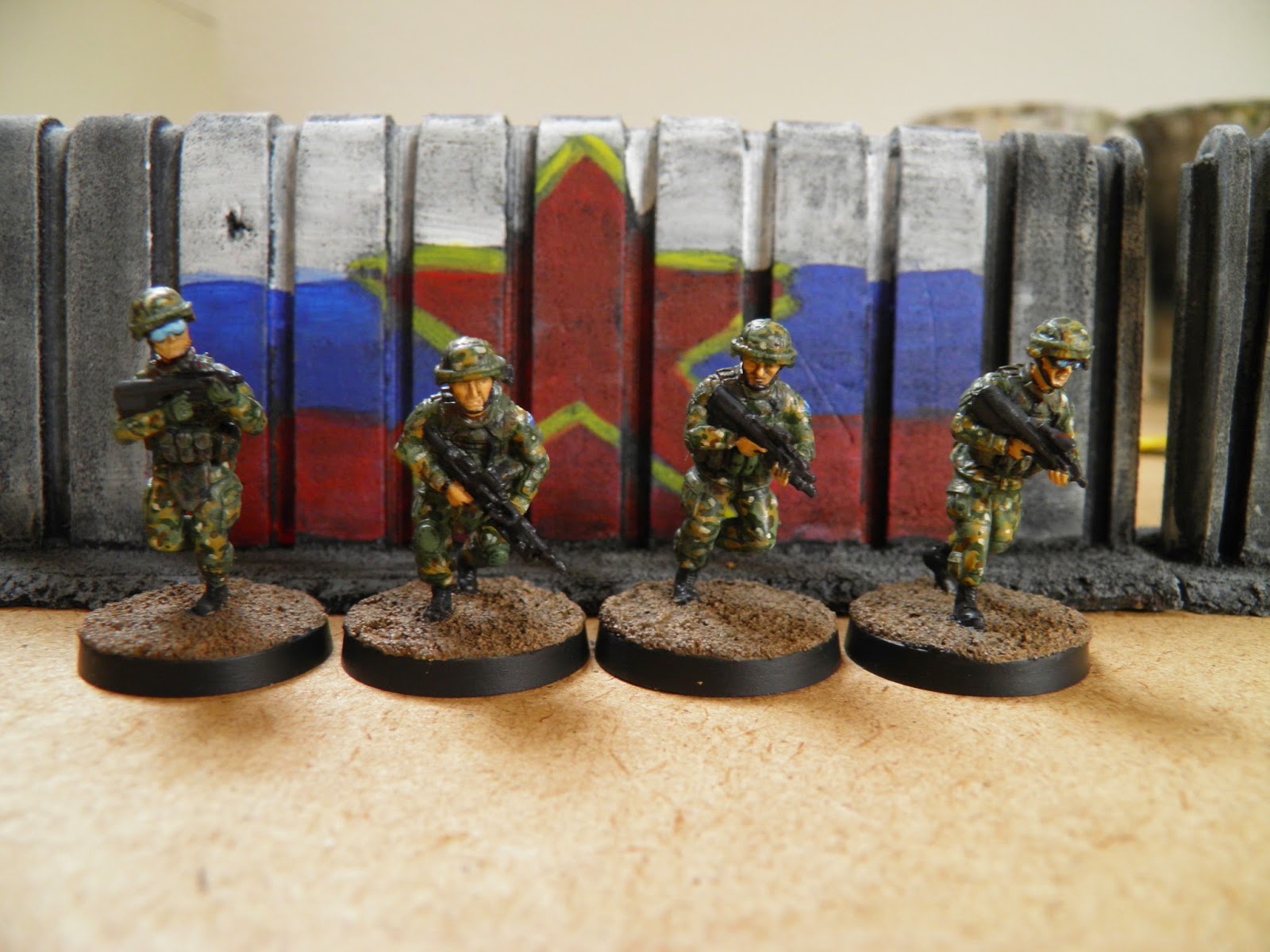 Only one fireteam in a section (that consists 2 teams and a section leader) would have a sharpshooter, but I might just put one in every team for the sake of using them. 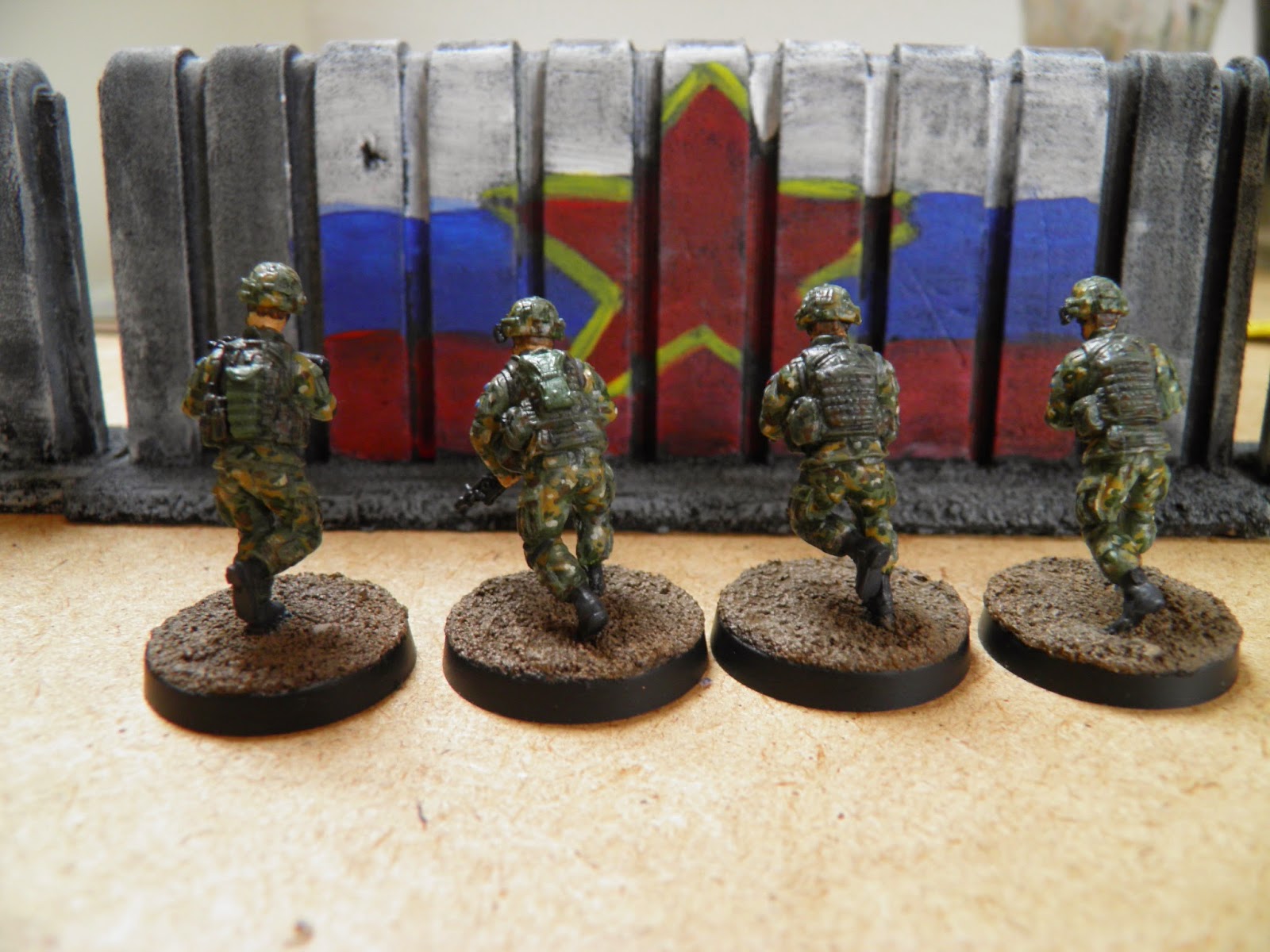 I don't have a pre-painting photo unfortunately, but they had their weapons swapped, canteens added on two of them and camo strap fitted to their helmets. Two of them have helmet cams, which I'm not too fond of, but I didn't really feel like removing them, either.

I only one complaint about Empress figures at this point. A lot of my miniatures have leg halves not matching (the mould probably slipped). It's not too visible when painted, but it irritated the hell out of me when I was working on them. I did contact the guys at Empress and I was offered replacements, so that is not a rant over service. In the end, I just kept mine as I couldn't send back half massacred miniatures, could I now?

As you probably can NOT see on the photo below, the camo on them has larger blotches, but also a lot more of white. It's hard to photo standing and prone figures together, but I have to admit I'm quite satisfied with how they all look like, even if there is a lot I wish I'd do different. 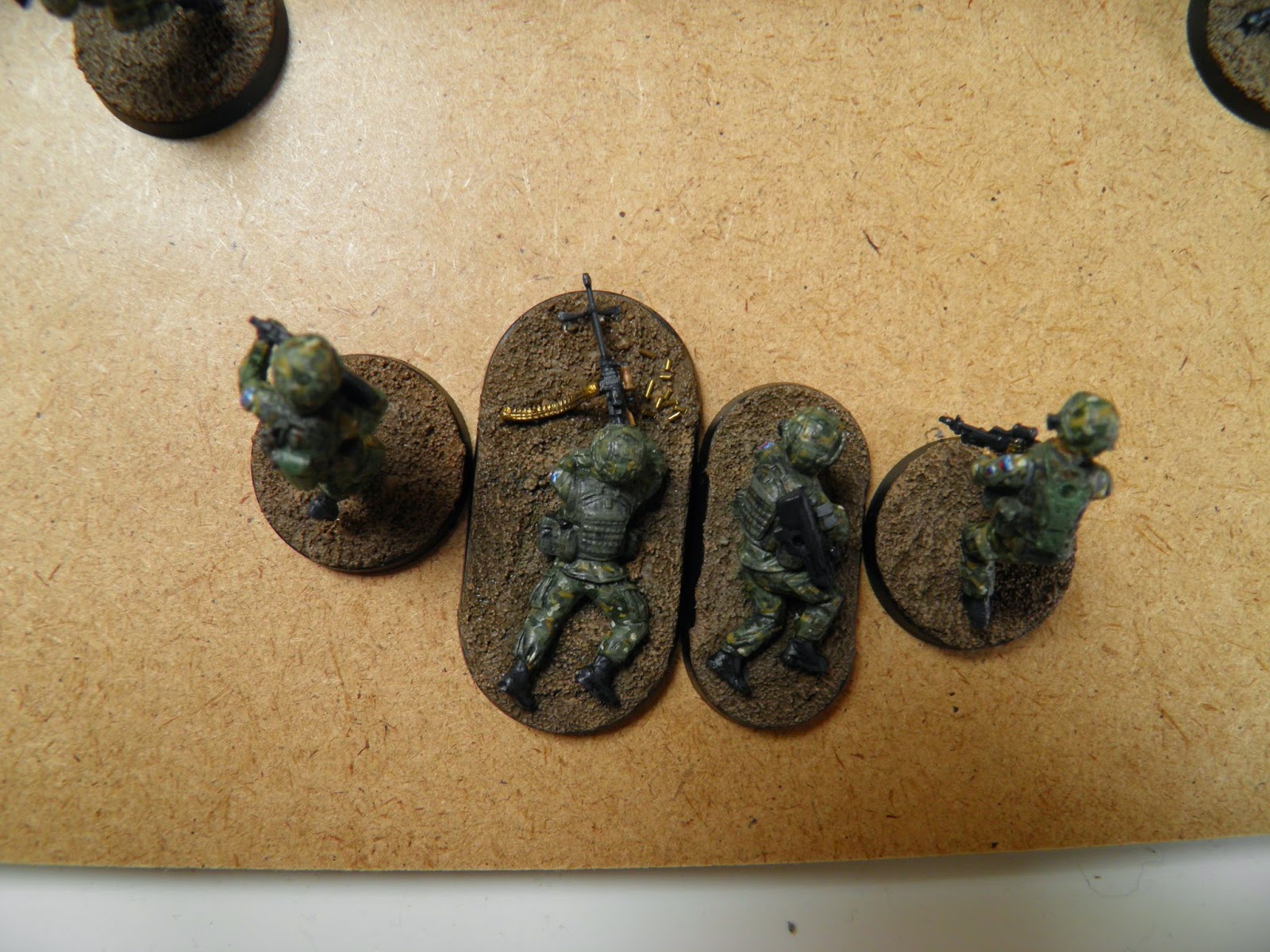 Lastly, a random patrol photo below. I wish I didn't paint camo on the Humvee gunner's face, but to be perfectly honest, I wish I'd paint camo on everyone else's instead! 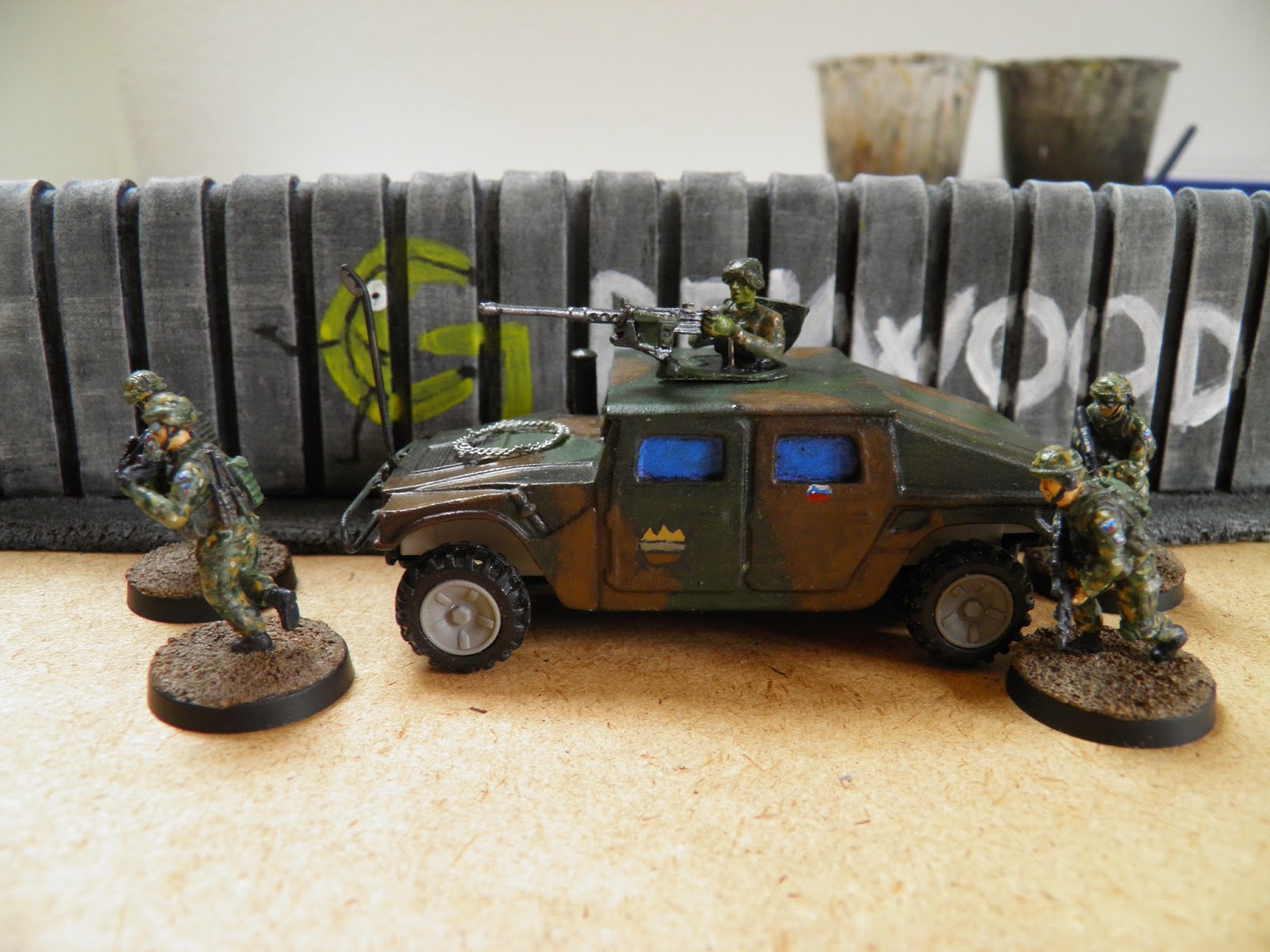 That is it for today, I have only one more team ready to be painted and then I'll have to start converting them again as I took a bit of a break from cutting all the metal. I am thinking about a game as well, so hopefully I'll have an AAR for your next, if I don't manage to paint the other team in time.

I painted these three "civilians" a while ago. They are all made from Studio miniatures zombies, which I thought was as good source for civilians as it is for zombies. It isn't. No matter what you do, you can't get rid of the "shambling stance". I got a few more in the pipeline, but I will probably just use my zombies for larger rioting mob when needed. The guy on the left could be either friendly or hostile, as he is waving around. The one in the middle is clearly ready to stir things up as he even invested in an overcool bandana to cover his face. And the old man appearance of the last guy shouldn't trick you - he carries a rock and is not afraid to use it! 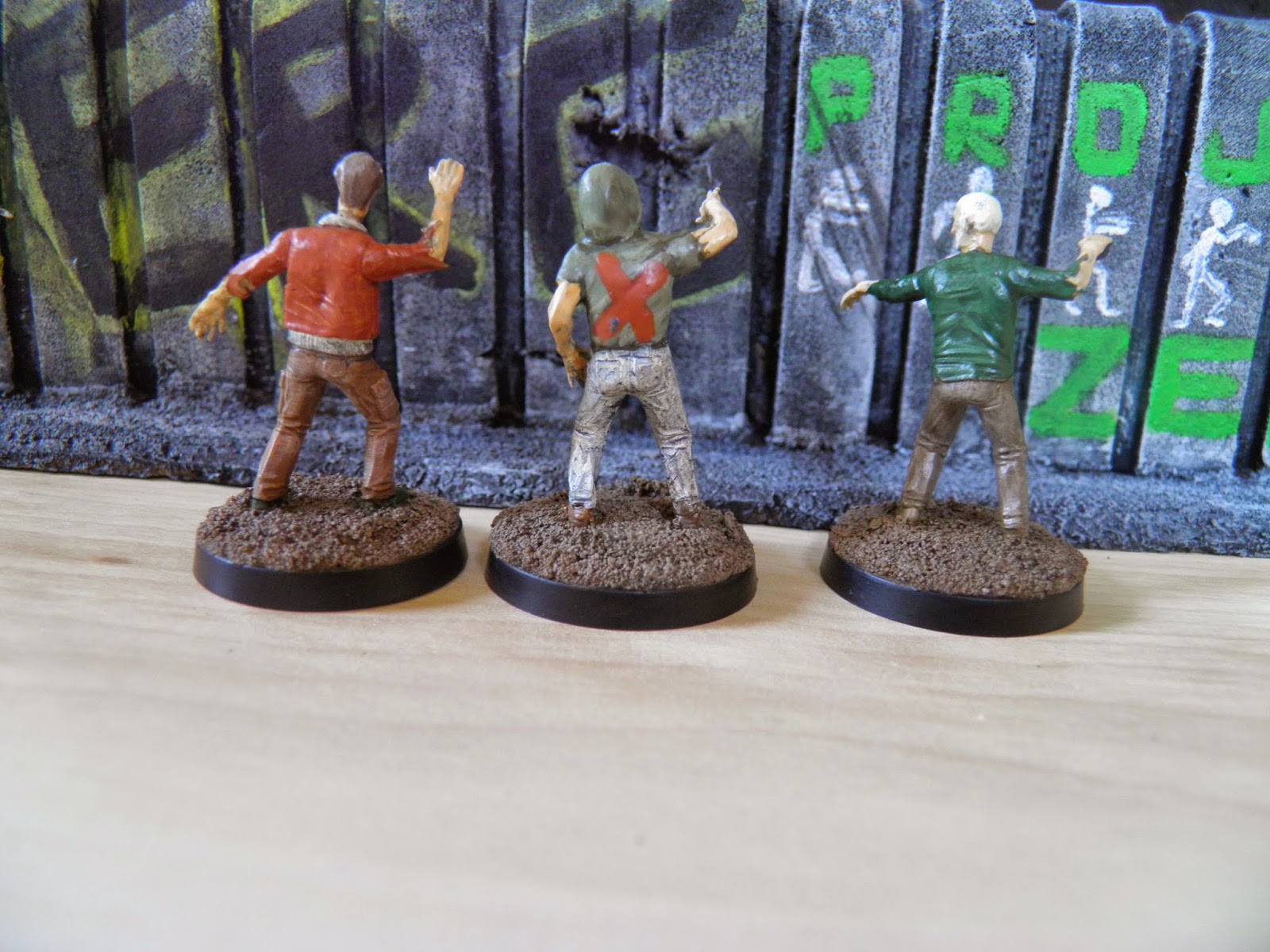 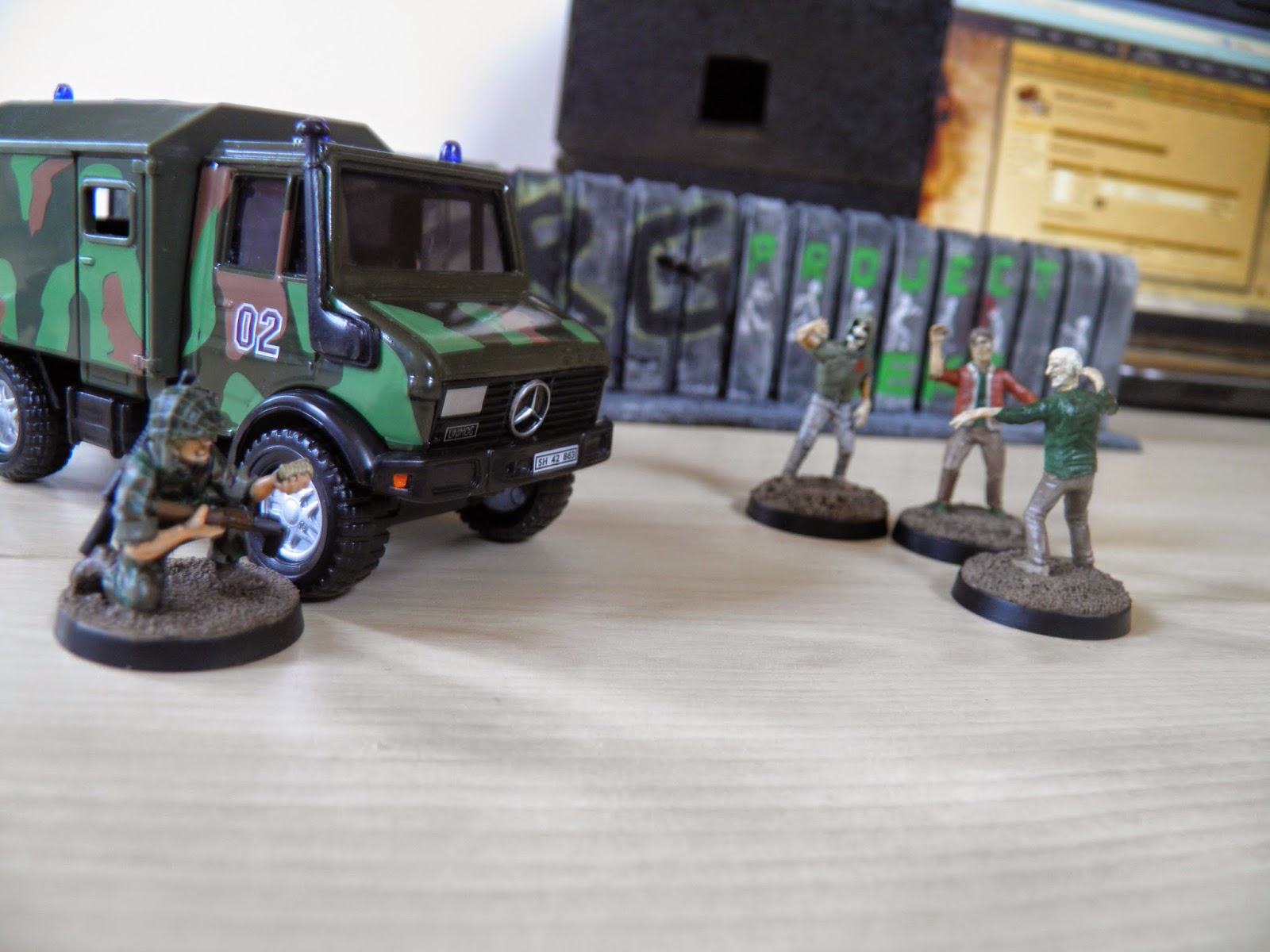 I will be using them to litter the board, obviously, acting as a roadblock and another thing for both sides to worry about (you don't get people to support your insurgency by shooting at them!)

Perhaps it's time for some public ordering!
Photos are either from Germany in a preparation for Kosovo or the Kosovo itself (more likely as there are no role players around), I can't remember anymore. 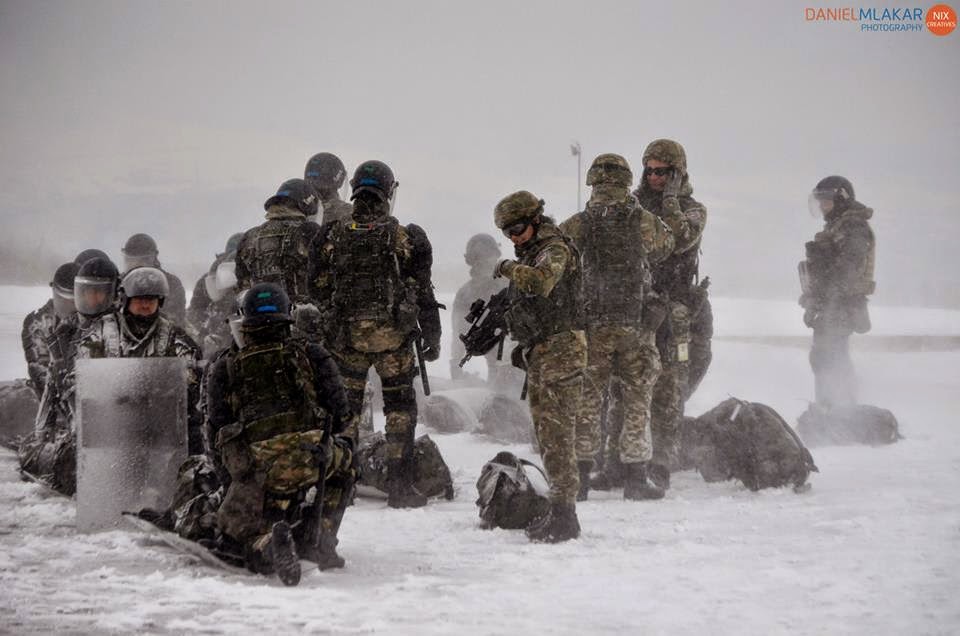 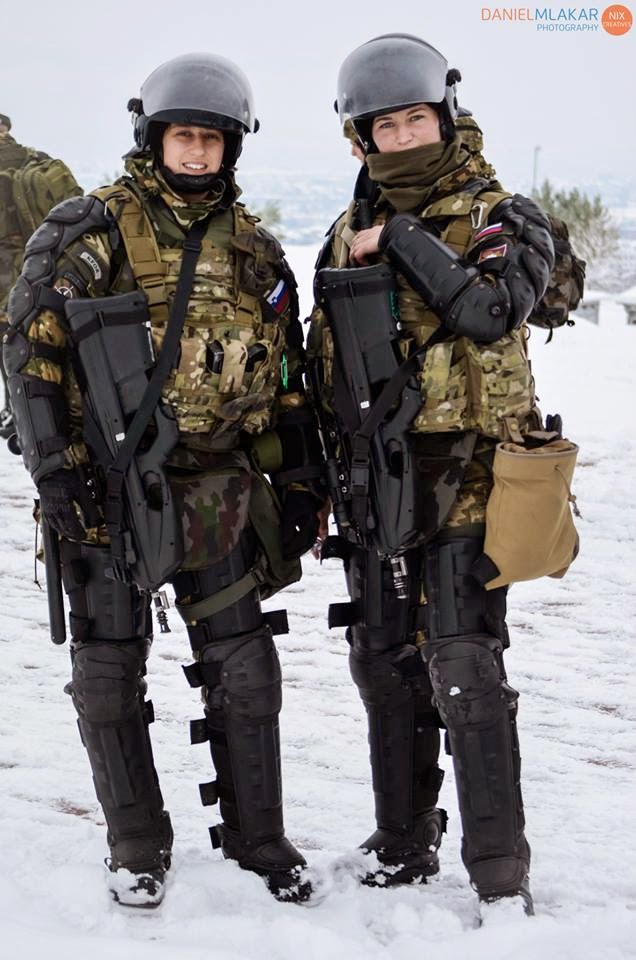 Thanks for looking,
Mathyoo
Posted by Mathyoo at 09:47 22 comments:

It has been a tough mind battle, but I decided it is time to tackle the camo and I present you my Slovene GPMG team.

Each platoon would have a HQ squad with three GPMG teams (pairs, actually). I only got one and given how much fire power they spit out in games, there is little need for any more. 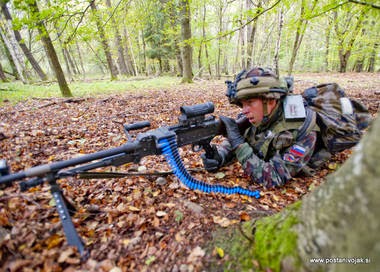 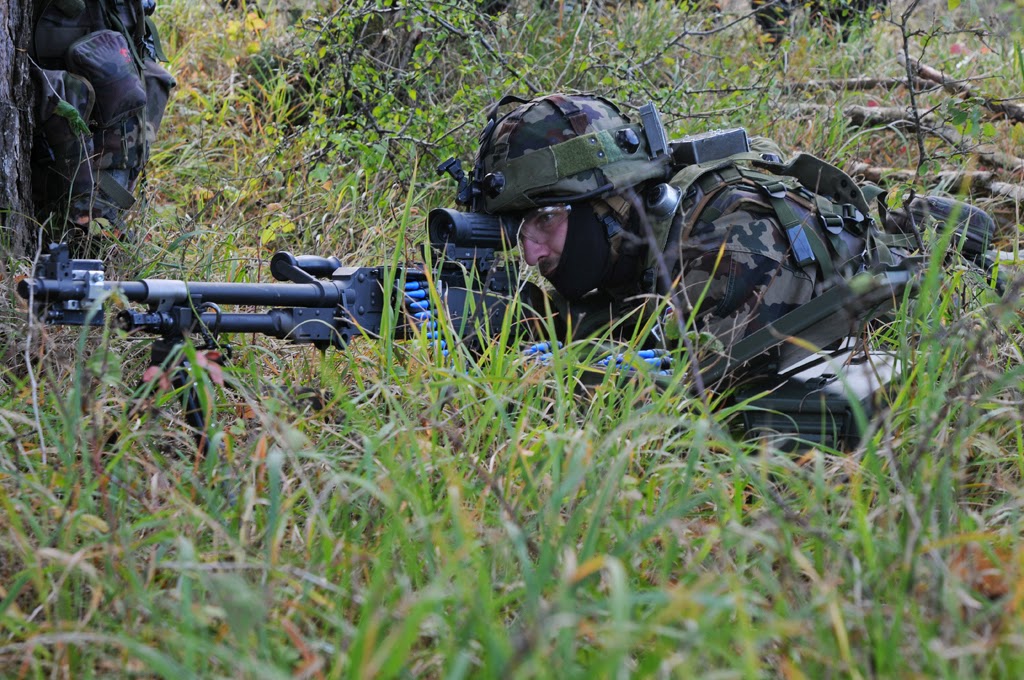 As our army uses the "European" version of the machine gun, and I am converting mine from American infantry (that uses "American" version with a heat shield, just like in case of the minimis), I "had" to swap the barrel for a bit of (way too crooked) wire. In addition, I sculpted something roughly resembling our aiming device.  Both of them got camo straps on the helmet and canteens. Again, vests were left intact as it would require too much work to make them proper for a very little gain. 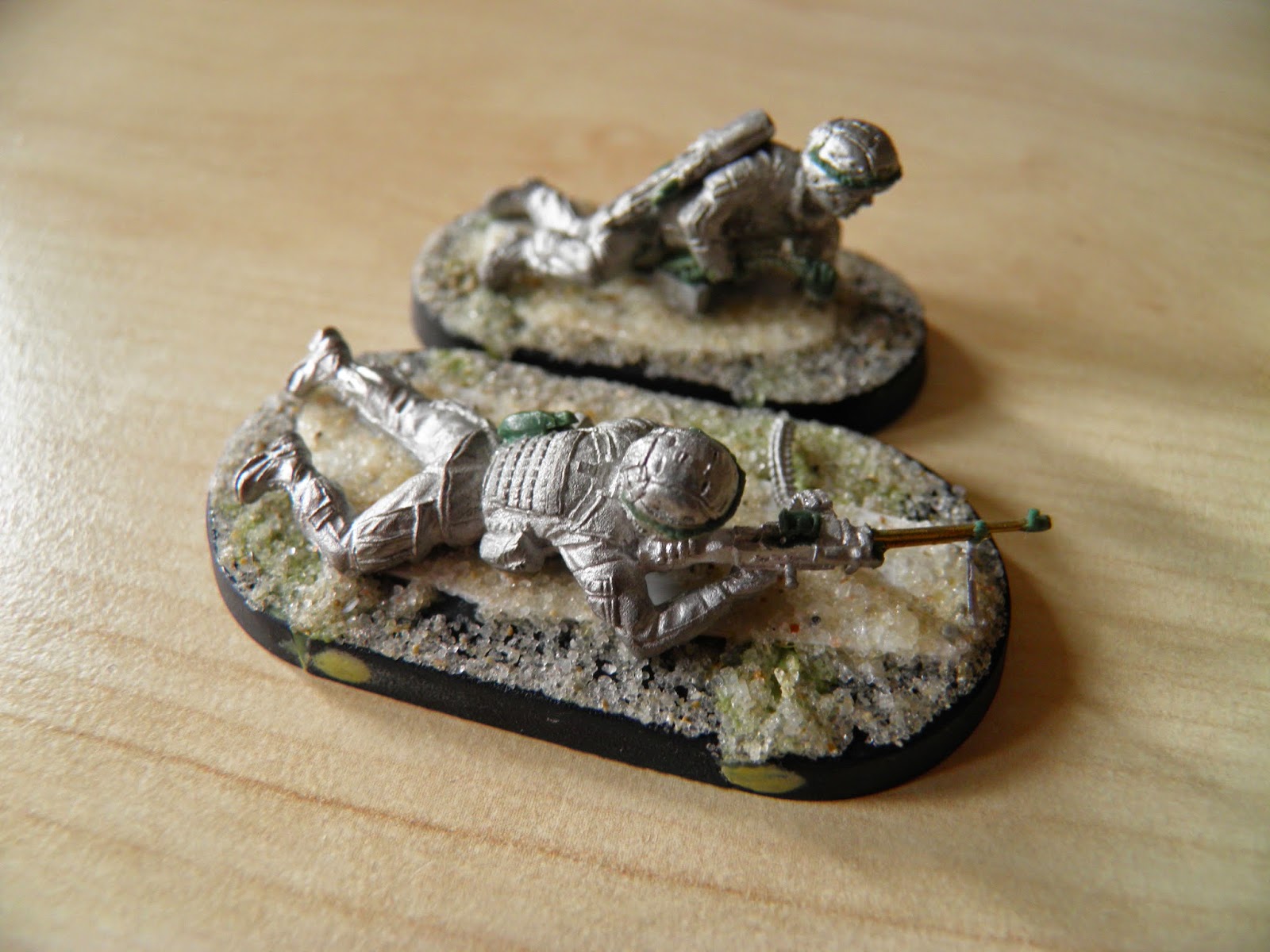 Assistant gunner originally came with holding an M4 rifle, which obviously had to go. As replacing it with an F2000S would requite a lot of cutting, I decided to just give him a box of ammo instead - it shows that his primary role is to feed the machine gun. His rifle was then "strapped" on his back. 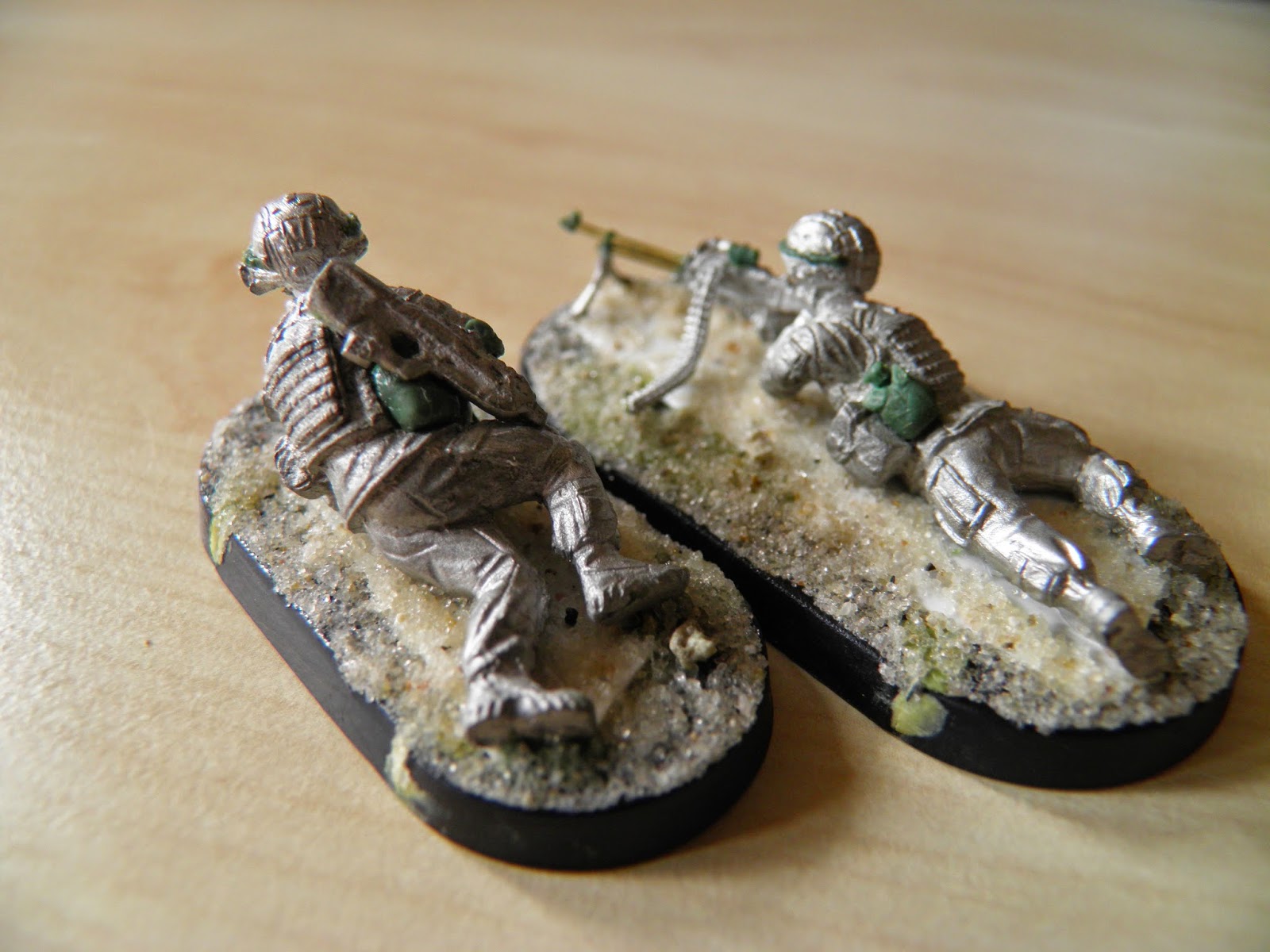 As I've said many times before, the Slovenian army is now using a new pattern, called SloCam (really!). It was developed in Slovenia and it is clearly inspired by Multicam (as is the new British MTP). While this means that in wargaming, painting Slovenes, Brits and - to some degree - Americans is much like painting the same army, it helps with  the recognition of friendlies. It also helps with finding a painting tutorial, as the pattern seems quite daunting. I had to adjust the colour palette a bit, as SloCam is much greener and thus more fitting to forests than Multicam. It also doesn't incorporate any black tones at all.

I did took notes of the paints I've used with my Humvee crews, so I am working with what I've learned and what new I've came up with.

Light green base
I went for german field grey with some goblin green and white added until it "felt right". I then drybrushed it with the roughly same mix, with more white added.

Ochre patches - There is a sand colour as well, but ochre has a bit stronger tone so I'm only painting this one

Dark green patches - Again, it seems there are three different greens, but with green basic colour and dark green, third would probably not be visible enough as camo is crowded using 5 colours already

Dark brown and bone stipples. There is actually a lot more white in it than there is brown.

Vests and equipment are in the old pattern. It's a german field grey base with black, brown and green "amoebas".

Camo didn't quite look right even after the black wash (I should invest in an ink!), so I drybrushed it all together with some brightened fieldgrey. It dusted it up and hopefully brought out some details. It also fades the camo on the vests, which hides the cammo effort, but it's a bit more realistic as far as I'm concerned. 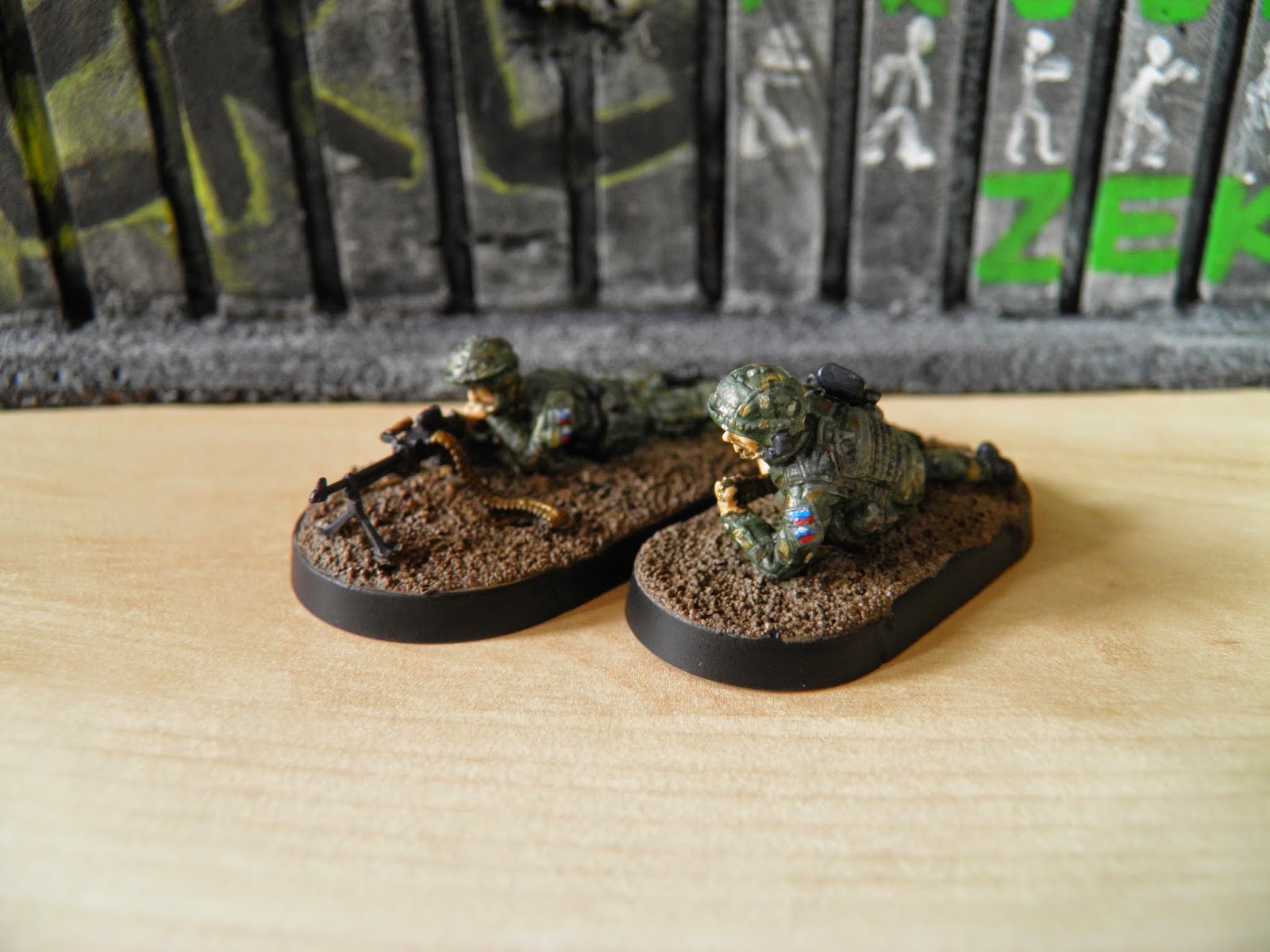 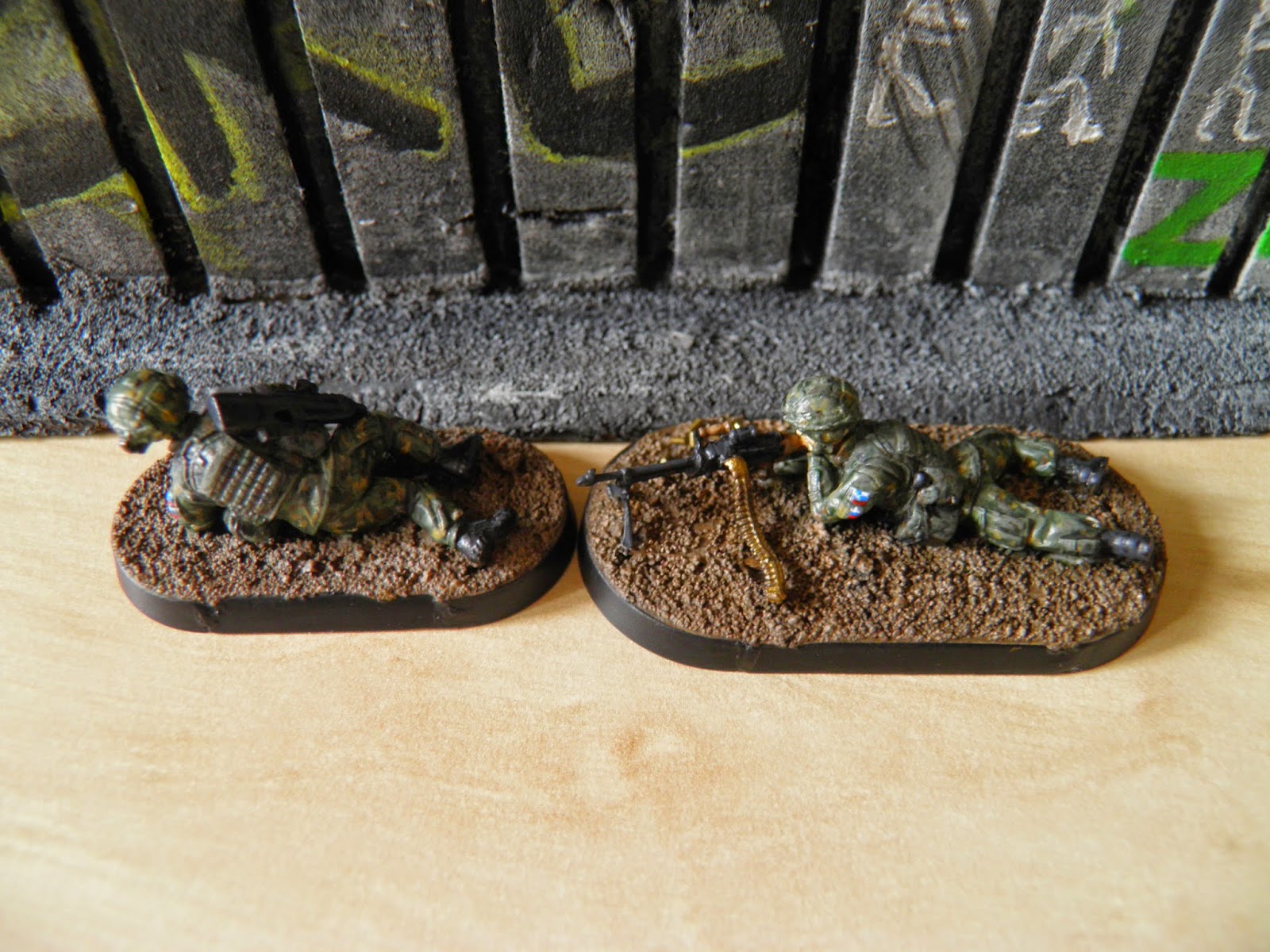 Spent rounds around the gun are something I was quite happy to put on my FOW bases, they really add a touch. Keep in mind there is still foliage missing. 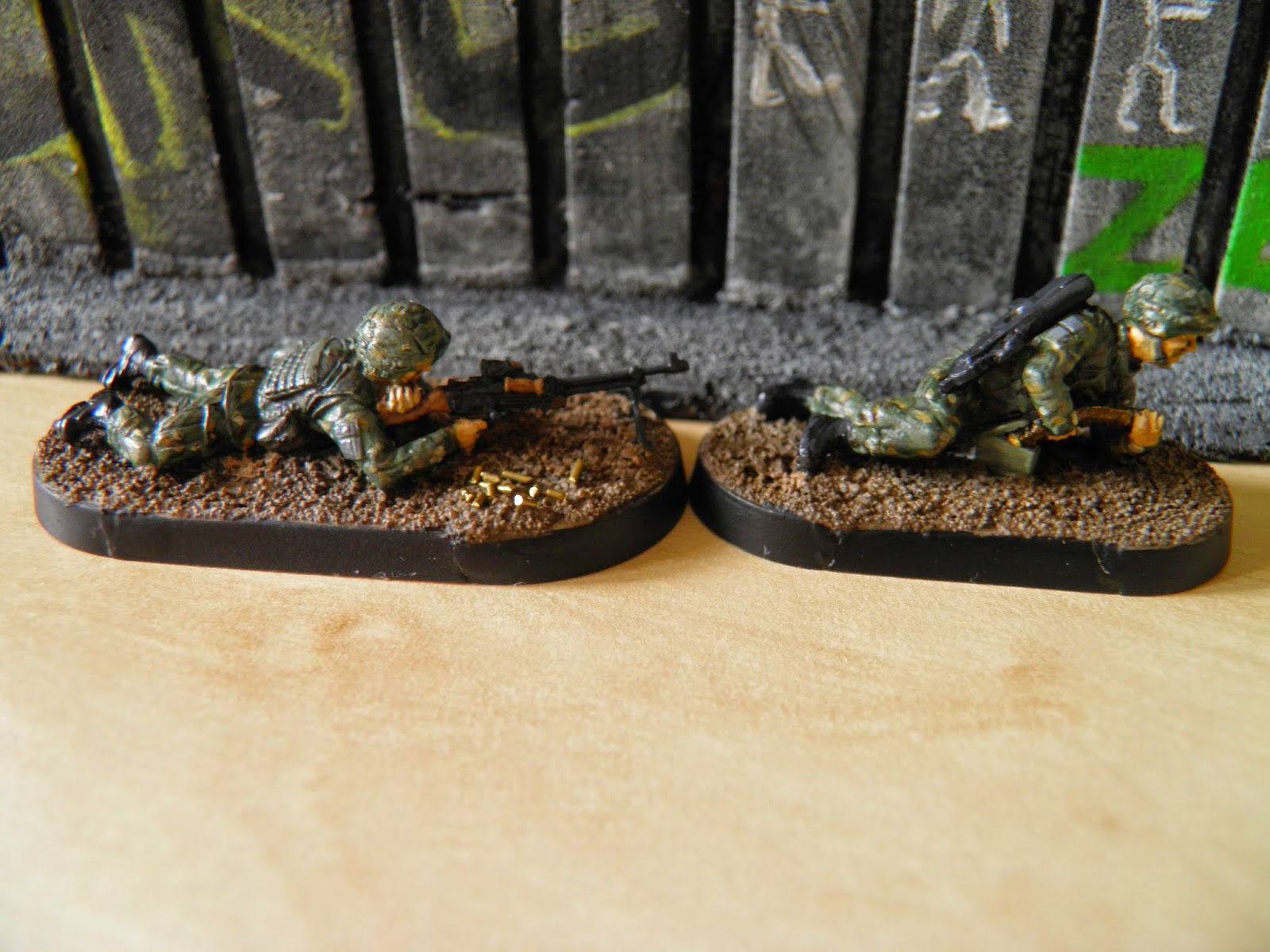 Their bases are conglomerates of round and square 25 and 20mm bases. I saw that Vampifan is basing his prone figures on 20mm bases, which I agree looks a lot better - but not for the gunner as I would hate to see his gun and legs poking off the base. 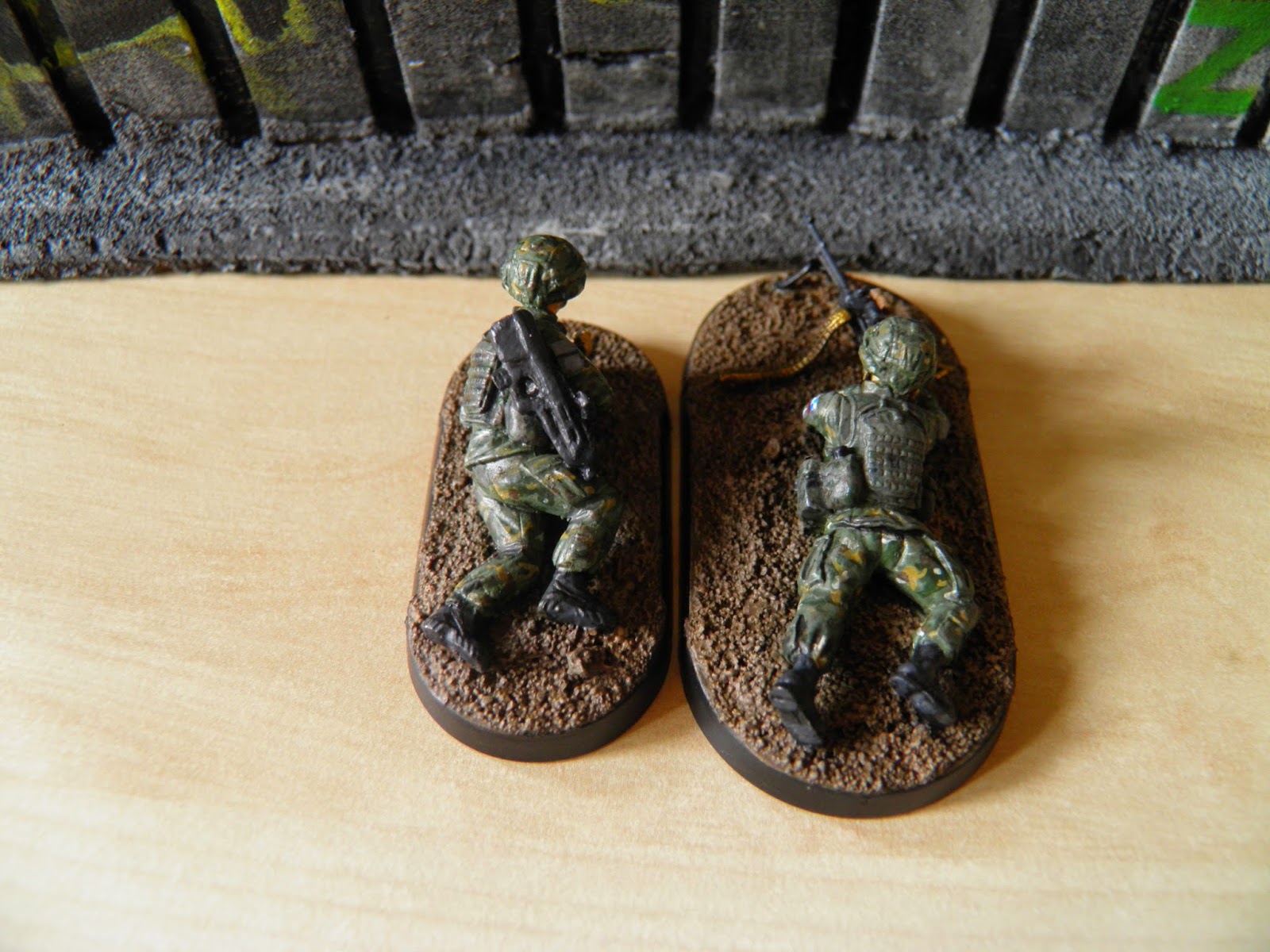 While I am quite happy with it, something that I can't put finger on bothers me. It's clearly too dark, but I think there should be way more patches and above all way more white dots.
If anyone finds something else, please feel free to comment!

Below are two photos of what I was after - duplicating it seems a lot harder than one would imagine! 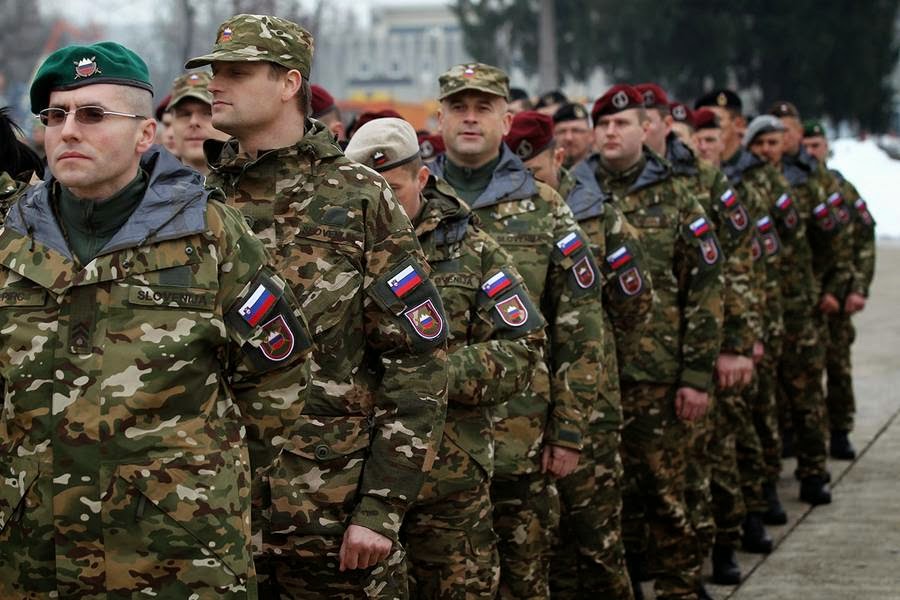 Also, a photo with soldiers using new uniforms with old vests (look at how faded they are). It includes a properly dressed female soldier :D. New Evergreen Revolution Army (New ERA - working title!)'s propaganda machine has been successful in recruiting a local sharpshooter/hunter/FPS gamer. Equiped with a smelly set of fatigues and a scoped rifle, he is determined to bring terror to the Evergreen governmental forces and anyone foolish enough to support them!

And the guy himself: He was built from Warlord USMC spree (just as the members of the fire team he is shooting at!). He is actually armed with a Garand rifle, but I can't call it that as I've painted it wrong (the bottom barrel end is painted as wood if anyone cares about such details). I added him a scope, which is why the scope itself is a bit crooked. 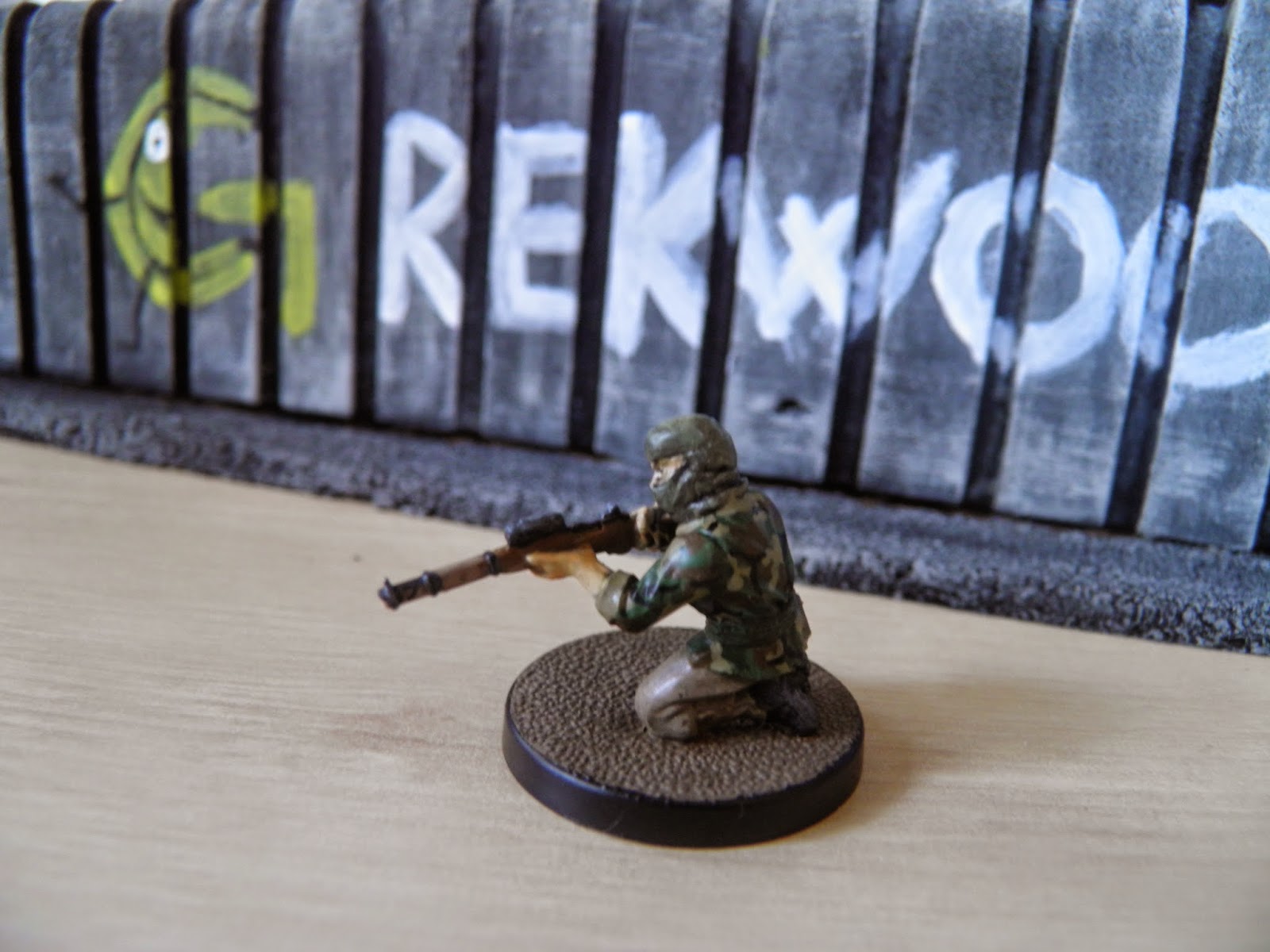 I am very happy with how it turned out, except for the wrapped head. It has too "middle eastern" vibe to it. I was aware of that when I was sculpting him, but as his head underwent a lobotomy, this was the best way to hide the result of an amateur surgical operation.

In other news, I am almost done with the painting of a Slovene GPMG team. More on that when it gets done!