Hobby is still slow here, the solo gaming just does not seem to cut it for me. Bunker is progressing slowly after the initial enthusiasm, but an unforseen surge of modelling made me finish yet another two recycled projects.

The War Correspondent and Interpreter miniatures you are about to see both started years ago (literally) when I started working on Slovene soldiers for the first time. The latter have since been replaced with the fantastic Empress Americans, which I think was great choice as it let me finish a lot of them reasonably fast.

Still, I was left with 4 half done dollies and I used two of them to make the miniatures I wanted for a long time - interpreter and a journalist.

Below you can see them at the stage where I essentially gave up on trying to make them look any better: 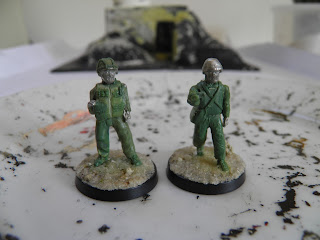 The 'terp on the left looks a lot like what my Slovenes would have looked like if they were ever finished, including the 'old' helmet cover with loads of camo stripes. He was given a walkie and a single pouch. I thought about giving him an AK and eventually settled for an unarmed version.

The correspondent was given a plain helmet (that would need slight beefing up, they both use same heads actually!), slightly different vest and a small one-hand camera. The first idea was to give him a large camera, because they 'look cool', but that would have involved a lot of work and I think someone embedded with a fighting unit would appreciate the flexibility of a lighter equipment. He was given a satchel and yet another camera, however. 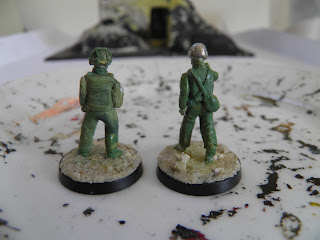 The interpreter was painted in a mix of camo and plain greens to keep him interesting. I've hid his identity behind a ski-mask and gave him tacticool gloves.  While my painting efforts have lowered somehow in the past year, I think it looks quite fantastic. 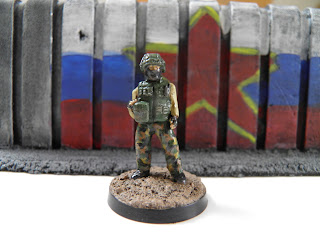 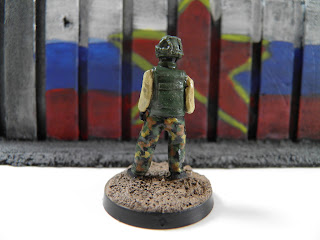 Here he is compared to an Empress US soldier, as you can see he is slightly smaller, as dollies are older, when 28mm was 28mm. 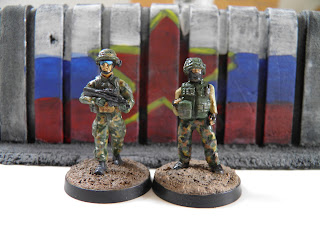 The War Correspondent was given more civilian clothing. Green helmet was justified as a military surplus. I was not sure about vest colour, I vividly remember reading how blue vests were only good for snipers to shoot at the journalists in Bosnia. But apparently they are still in use, and if nothing else, it helps with a recognition of the miniature. 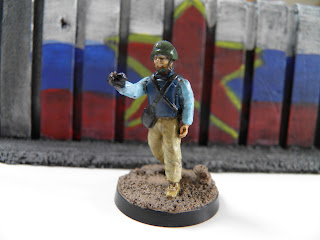 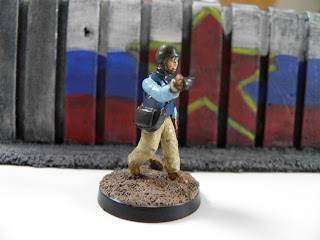 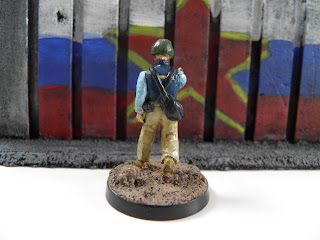 There is not much to add, below is a size comparison photo. It was made using same E-bob dollies as the Interpreter, so there are next to no differences - keep in mind, however, that I 'grew' both of them for a milimeter or so by adding putty to their shoulders back when I started making Slovenes. 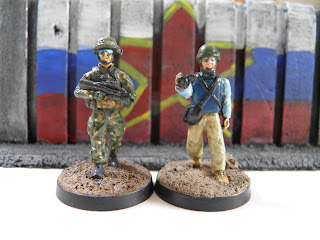 the work continues on the bunker (and a wish to make it in a smaller scale instead!).

The list of things done is rather extensive, counting the fact I barely touched it in the past two weeks.

First, I had to peel the paint off, as mentioned in the last post. 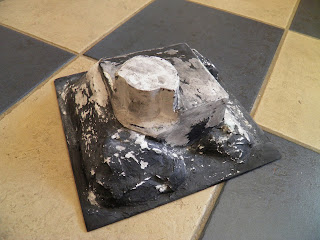 Except for being rather messy, it actually gave the bunker a nice worn out look! 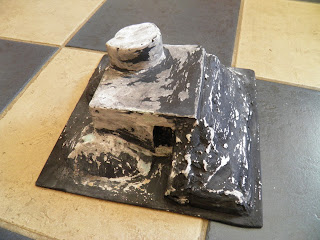 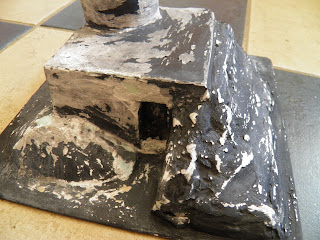 Next, I decided it needs the cuts in the roof to help keep water off it, and to give grass something to root into for camouflage (can't be seen on photos). I also started filling some holes with milliput and then I started working on the firing embrasures (a plate with three holes for the cloche, plus a single flank mounted machine-gun). 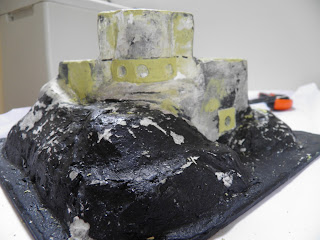 I also started preparing holes for ventilation, periscope and a grenade chute. Lastly, I sculpted a horrible stone wall that holds the mound of earth vertical at the entrance. I think I will redo it, but I would have to figure out how to make it look a bit more realistic. 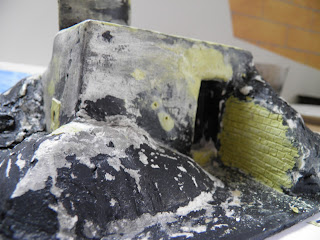 What else can be seen is the fact that the turret in particular is very crooked, which is driving me mad. As usual, the lesson learned is that more time and attention should be invested in planning!

That's it for today!

Thanks for looking,
Mathyoo
Posted by Mathyoo at 16:03 15 comments: