I got something special to show you today! It is a miniature of an extinct mega fauna - enter: Megatherium! 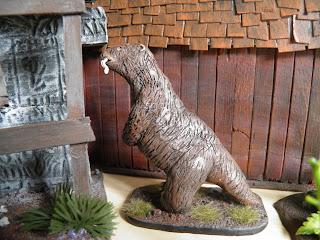 Marked by this thrilling, inspiring name, seconded only by Dinosaurs, is somewhat cute giant ground sloth. Apparently, it grew up to 6 meters tall and has weighted 4 tonnes. There is quite a few photos and illustrations of it on the net, each a bit different one from another. There are skeletons of it but as with anything else long extinct, one can only guess how exactly it really looked like.

It lived in nowadays South America. It was supposedly walking on all fours, but could sit on its huge tail to reach higher branches. As todays sloths and anteaters, it had long claws and had to twist his feet a bit to be able to walk.

I was quite interested in those beasts when I was younger, but I forgot about them eventually. My interest grew again when I saw Colgar6's amazing post about his collection. He has mentioned that finding pleistocene giant mammals would make more sense than finding living dinosaurs. And I completely agree. As Strange Aeons has a special linked campaign where you visit unexplored lands of Brazil rainforest, searching for a lost expedition, where you encounter dinosaurs, I have decided to swap them for Ice Age creatures.

This one will be used instead of T-Rex. Now, I know they don't really match, especially because Megatherium was mainly herbivore (it is supposed that it might be eating carrion sporadically), but its sheer size and huge claws could be used in offense. If anyone thinks any other mammal of roughly that period (very, very roughly that period, so we can go a million years back :D) would work better, please let me know. So far, the only one I'd consider would be Terror bird, but I think it size would make it a better raptor supplement (but I will use wolves for those, as suggested by Zabadak :P). 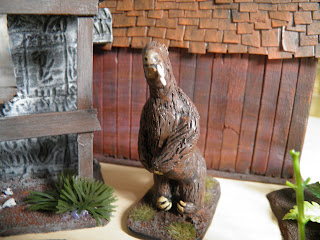 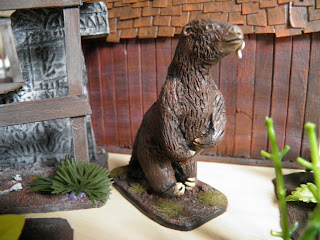 Now, I've found a nice human-megatherium size comparison photo that I've used to roughly sketch the sculpt. I have shaped it with wire and filled it with air drying clay. Because I planned to finish it with milliput for texture, I left it way too thin, which kinda bothers me. Plus I allowed myself to get lazy again and didn't use wire on any of the limbs. They aren't too well done, compared to illustrations I've made it after - they do look okay on the end sculpt however. Last thing that could be done better is the face. It was done really quickly so it is way too narrow - eyes are looking to sides instead infront - like those of fish.
Anyways, I've decided to keep those sculpts (I was/am working on 2 others at the same time) and finish them. All but one (we will come to that in later posts) were a blast to sculpt and I am looking forward to sculpting some of the weirder "elephants"  - say Deinotherium.

I've based this one on 2 sheets of roughly cut plasticard, so it looks terrible, but I can live with that.

For the end, here is a scale shot. While the animal seems quite small on its own, it really is towering over brave agents. If I ever go to redoing it, I would certaily make sure I position it so it looks down, the only reason for it to look straight forward is if it would be feeding, anyway. 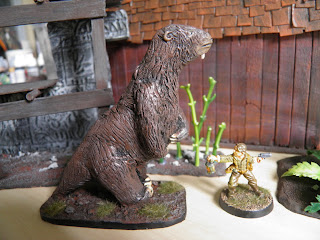