...or perhaps some other teratorn (giant bird, but using big words makes me feel smart :P)? 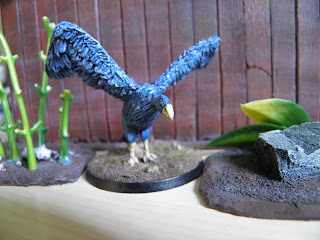 Argentavis magnificens, which, unimaginatively means magnificent Argentine bird is supposedly the biggest bird that has ever lived. There isn't much known about it, but its wing span is estimated to be as large as 7 - 8 meters! Now, I've sculpted this and the two previously shown monsters in 1:50 scale, as I found it easier to convert numbers...I never was much of a maths guy :P. So, my models wingspan should measure something like 14 centimeters, but I did something wrong somewhere so it gets to around 11-12 centimeters or so. We could say it's not a full grown bird yet, or just call it some other teratorn - I don't think anyone would lose any sleep over this matter! 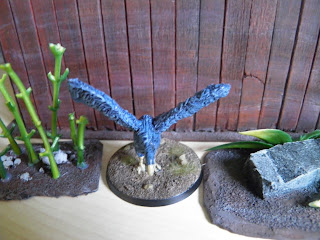 I will use it instead of Pterodactyl in my Strange Aeons games - this is why I've decided to find a giant flying bird instead of terror birds, the ostrich-like predators. I have started sculpting it with the other two sculpts (previously shown woolly rhino and megatherium), but it bogged down with this one. The suffering and sheer repulsion its wings caused me could only be compared to putting shingles on your model roofs. Boooooring. It has killed my sculpting mojo for weeks, I am telling you. And feathering them was the easy part...I just couldn't twist the wire to the right position, no matter how many birds I have looked at. This is some seriously weird piece of engineering! I went with intimidating / take off position and while I think position came out okay, wings are too slim (as in there is only three lines of feathers and should be 1-2 more) and all together, the wings are too thick (as in individual feather is too thick so wings are quite bulky). Also, as I am stating the bad things, its legs are too thin - those toothpicks could never support 70+ kilos that those birds weighted! 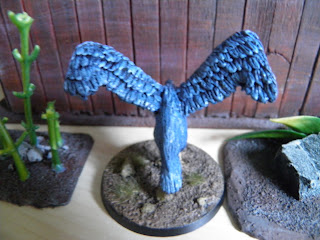 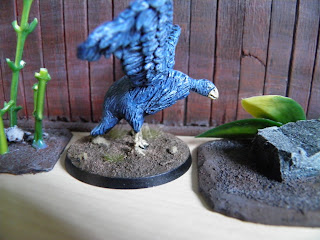 I have painted the bird blue, as per most common art I could find on the internet. While I can't say I'd expect a condor-like bird be blue, I must say I am quite happy with five-minutes-paint-job and this is one of the rare sculpts where I feel looks better with paint on. Talking of real birds, I've did some searching and I've found out they probably had problems getting off the ground and had to jump of cliff, like modern hang gliders. Nobody is even sure if it was able to hunt or had to resort to scavenging. I've read arguments that made sense to me, supporting both theories.

No matter the historical facts, I think a human sized bird (based on 40mm base) will fit in nicely instead of pterodactyls and could easily be used in other pulp games! 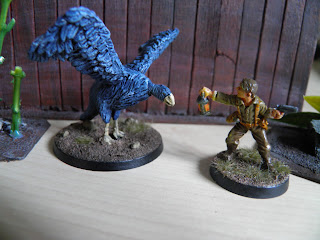 Ah, there is one more thing that really, really bothers me. Somehow, I've manged to glue it way off centre of its base and I must admit, the more I look at it, the more I feel I should fix it. It doesn't compromise its stability and such, but it annoys me...kinda like half-closed drawers. Hate those!

Well, anyways, thanks for looking and expect another extinct animal in next post!

Mathyoo
Posted by Mathyoo at 15:23