The WW1 really sparked my interest and now I'm neck deep in the project - and already on the edge of desperation.

The rules I'm working on are slowly taking shape and I started looking out for suitable miniatures for Austrians and Italians (I am aiming for the time around 11th Battle of Isonzo, a prelude to the more famous 12th).

Long story short, I found there aren't any. Brigade Game has Italians and Austrians for 1915, which isn't good enough. Then there are Scarab games, which have lovely characterful miniatures, but I couldn't get myself to like the style (not the quality of the sculpts, that doesn't really bother me that much).

In the end I decided I could sculpt my own. Yes, again. Yes, from the scratch. I started gathering material, being very familiar with Austrians that part was easy. Italians less so, but I slowly gathered enough information to be able to put something together.

To help me with judging scale and style, I bought some Great War Miniatures Germans. While waiting for them to arrive, I was working on one of Ebob dollies I had laying around to give me some taste of what's to come: 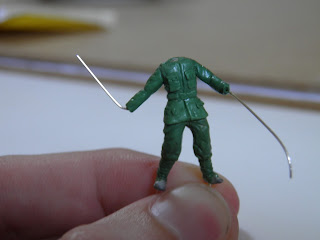 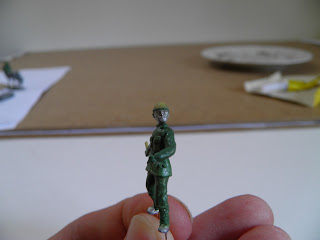 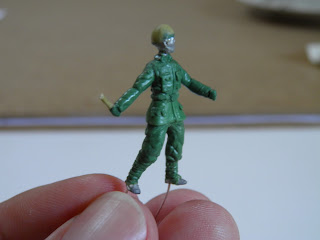 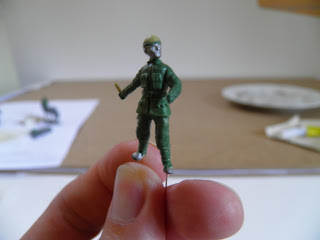 The first lesson I learned was premade dollies are no good. They snap and this guy has wire for the arms, for example. His legs are held together by putty alone and I am afraid to touch it by now, as it's all woobly. The other lesson was I convinced myself this is something that could yield results.

By the time my GWM packs arrive, I had a helmet 3/4 done (it is supposed to be a Berndorfer, please). This is where I quit working on him, but I will be using left over putty to slowly have him finished for that 2 minutes rush of pride when a "project" is finished. 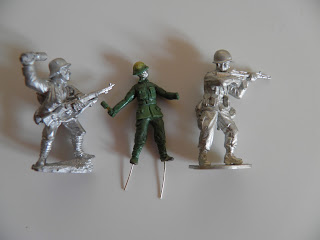 First thing I noticed when I got my GWM Germans was just how large they were. I hereby apologise for claiming Open Fire Cold War Germans were extraordinarily large. As it happens I just happen to have smaller miniatures in my collection! 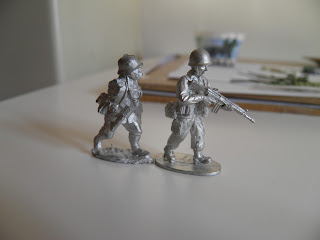 Having made some rough measuring, I decided they are both more or less in 1/50 scale, which makes it easier to sculpt weapons to fit. I also noted that Open Fire are far better proportioned and more naturally posed (mind there's quite some years in between the two sculpts - I am not judging, merely comparing). If you stare at them long enough (as I did!), you can see how exaggerated the position of the legs are on the GW miniatures.
Secondly, they are both something like 6 heads tall (as opposed to natural 7-8) and GWM is a lot beefier. In a way, I prefer the GWM as they are easier to paint, but I found it hard to force myself exaggerate both the details and the poses, for better or worse.

Unrelated to sculpting preparations, I was otherwise disappointed in my GWM Germans. Sculpts are lovely and I would love to have more of them, but the casting was horrendous.  Below, you can make out a large flash in the backpack-helmet-rifle triangle. That's just one of many simpler examples. 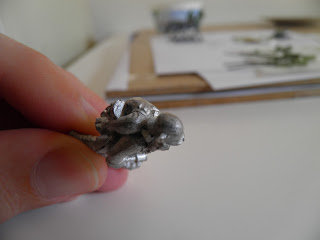 Secondly, look at the legs on this one. Firstly, notice the best putties I've seen (I told you I stared at a lot of miniatures), they are made to look as if they cover each other. Exaggerated, yes, but they look fantastic. And then notice the cut in the knee, just below yet another piece of flash. I think this could be due to fact the moulds are old and worn out. It was a bit of a joy killer, however, and they probably won't see their turn to be painted any time soon. 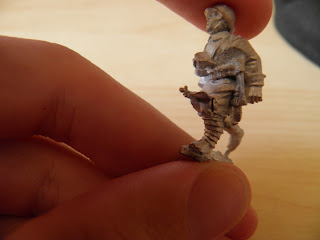 Anyways, using some of the poses as an inspiration, I started twisting the wire. I consulted my charts carefully and did my best to measure them. This is the point where I learned that you can not use (3 years old) milliput, as it cracks. What helps is to mix it with some GS, making it rock solid, yet slightly flexible.

I made 6 poses out of wire, 3 of them looking something like these: 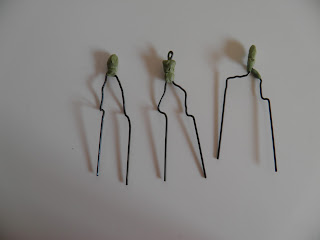 Now, full disclosure, this is the point where I died a bit inside, feeling I'll never make it. The wires just didn't seem right, something was off and I couldn't figure out what would it be. I am fully aware I need to practice, but looking at that wires made it seem as a bridge too far.

Anyway, I pushed on and started bulking out the legs. It is amazing how much better I felt after I've put some muscle on the wire and just as fast as I'd give up, I was full of optimism again. 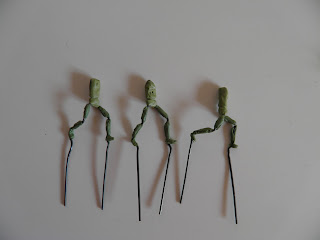 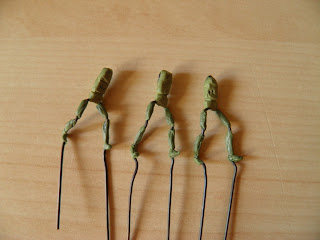 Having three done, I decided I would only work on 3 at a time at most, anything else is already a burden. And even here one tends to be left out in favour of other two.

For only a short try, I started working from bottom up. Not using corks that would give me a solid base, I found shoes very hard to do and rather  moved on to puttees. The idea is to work from puttees up and if that doesn't quite work, to bulk out the tights first and then work down with a good support.

I started working out how to make puttees. I can not imagine the greenstuff being rolled around a leg as a real puttee, and I generally came up with two ideas. On the photos below, leftmost example is the first one. I simply wrapped the GS around and indicated puttee with a knife. 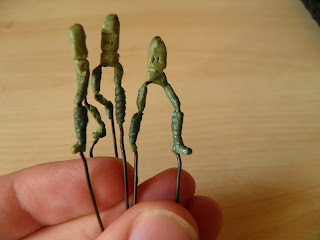 It doesn't follow any patterns, but the notches are subtle enough to give what I believe to be a good impression (it honestly looks better in person).  It is hard to get a knife all around to dent it, but it looks great from a bit further away.
Other examples were done by twisting a thread around the leg, which both gives a clear indication of a puttee being rolled up, and also looks somehow wrong. 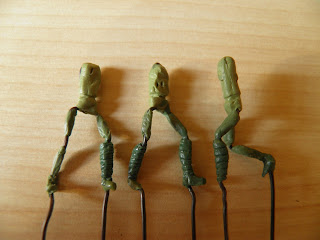 I am thinking what I should do is use GS-milliput mix for a harder putty, so that threat can't cut too far inside and then figure a way for a slightly more consistent rolls. As you can see on the rightmost example, I left far too much space in between the turns, making it awful. Harder putty could also simply be sanded where it would bulge. 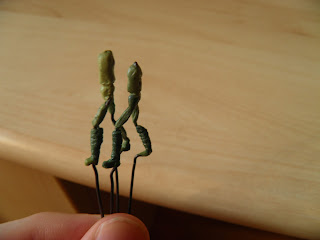 While I try to do something every day, I found myself very busy elsewhere just in the time I started working on these! Keeping it fun, I do try to do little at once to make sure I don't start hating them. I plan on working on these 3 up to a certain level and treat them as a practice, hoping the next 3 might fare a bit better. And then 3 after them should hopefully be reasonable and if all is right, I might be satisfied with the 3 after those. Or that's the plan at least.

As usual, thanks for looking, any comments or ideas would be most welcomed!

Mathyoo
Posted by Mathyoo at 09:03